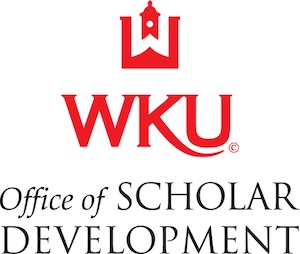 “In the last 10 years, the successes of WKU students and recent graduates in national scholarship competitions have facilitated deeper engagement in research, international study, experiential learning and service,” said Dr. Audra Jennings, director of the Office of Scholar Development. “Our students’ many successes have both reflected WKU’s commitment to engaging students in these areas and created pathways for students to expand upon the foundation they built here on campus with the support of faculty and staff. We are proud of the diverse group of Hilltoppers who have gained national recognition and pursued life-changing opportunities.”

Among this year’s record-breaking numbers are WKU students who were recognized in nationally competitive fellowships for careers in public service.

Deven Richardson was the first WKU student to earn the Charles B. Rangel Graduate Fellowship. The Rangel Fellowship awards $37,500 annually for a two-year graduate degree, paid internships in the U.S. Congress and embassies abroad, and opportunities for mentoring and professional development. Richardson will pursue an M.A. in foreign service at Georgetown University after completing a Fulbright research grant in Japan. He was previously recognized by the Benjamin A. Gilman Scholarship for study abroad and the Critical Language Scholarship, which he declined in order to participate in the Rangel Summer Enrichment Program.

Recent alumna Isabella Greene was promoted to recipient of the Thomas R. Pickering Foreign Affairs Fellowship after previously being named an alternate in the 2017-18 and 2018-19 competitions. She is pursuing an M.A. in international affairs at the American University School of International Service. Greene was also named a finalist for the Charles B. Rangel Graduate Fellowship this year.

Kara Lowry was the first WKU student awarded the Coro Fellowship, which equips emerging leaders with the knowledge, skills, and networks to accelerate positive change in society through effective, active leadership.

Andi Dahmer was named a finalist for the prestigious Rhodes and Gates-Cambridge scholarships for postgraduate study in the United Kingdom, the university’s second finalist in both competitions. She was one of 221 applicants from 82 universities to reach the final stage of the American Rhodes Scholar competition, which included 2,500 total applicants. In 2018, she was named WKU’s first Harry S. Truman Scholar and has previously earned a Critical Language Scholarship and a Phi Kappa Phi Scholarship for study abroad.

WKU students also earned distinguished recognition for undergraduate research. Three WKU students were named Goldwater Scholars, the most prestigious award for undergraduates aiming for careers in scientific research, totaling $37,500. One Gatton Academy of Mathematics and Science student was awarded $182,480 through the U.S. Department of Defense’s Science, Mathematics, and Research for Transformation (SMART) Scholarship.