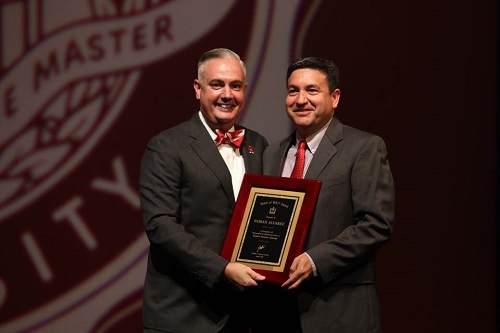 Fabián Álvarez, instructor of English at WKU and advisor for the Hilltopper Organization for Latin American Students (HOLAS), received the Spirit of Western Award at the annual President’s Convocation on August 19th. This award recognizes a member of the WKU community with exemplary leadership that truly embodies the university’s motto, “The Spirit Makes the Master.”

Lindsey Houchin, an English graduate student Mr. Álvarez mentored in 2015 commented, “No one represents the Spirit of WKU more than Fabián: joyful in the belief that today’s diligent work delivers tomorrow’s return and committed to enhancing the lives of others as they ‘climb to greater heights,’ all by starting within his classroom, connecting to the region and the commonwealth and the students who recognize themselves in him, and elevating the communities we, WKU faculty and staff, work tirelessly to serve.”

Since the spring of 2007, Mr. Álvarez has been teaching general education courses at WKU. It is no secret that many students are not enthusiastic about taking these required courses. That is why Mr. Álvarez’s teaching philosophy is to make his “courses relevant to students’ lives within the university and outside in the ‘real world.’” This has undoubtedly impacted countless students throughout his years at Western and has given them the tools that they need to succeed.

“For me, one of the most important aspects of winning this award is that it reifies my efforts to reach out to - to work with and to help - those who have less access to opportunity: that is the spirit,” says Mr. Álvarez. “I know that I’m not the only one on campus who does this. Their efforts, those efforts, on the parts of many who serve this institution, are something to emphasize and celebrate.”

Everyone in Cherry Hall and throughout WKU’s campus knows Mr. Álvarez for his great attitude and eagerness to help others. Dr. Rob Hale, Head of English at WKU, attests to Mr. Álvarez’s embodiment of the Western spirit.

“It doesn’t always happen that people who deserve awards receive them, but this is a case where WKU has recognized a truly worthy colleague,” says Dr. Hale. “Fabián Álvarez’s commitment to students has impressed me since I arrived at WKU. His efforts to help them become better writers, readers, thinkers, and human beings is unparalleled. He has high expectations for students, but he helps them know how to reach these expectations. Even when they are not as successful as they want to be, they realize that they’ve had tremendous support from Fabián and know that if they continue to work hard and build on the lessons he has taught them, they can reach his high standard. I feel very fortunate to work with Fabián.”

Mr. Álvarez certainly knows the importance of respect and helping others along their way to being their best selves. He credits his parents with teaching him the values of selflessness and compassion.

“I’ve tried to devote my life to provide as many avenues to success for those in my communities, to effect positive change in their lives,” says Mr. Álvarez. “This comes, in large part, to my parents who were always putting others first. They instilled in me that I should try, whenever possible, to help someone regardless of who that person might be, and this is what I’ve tried to do during my time at WKU.”