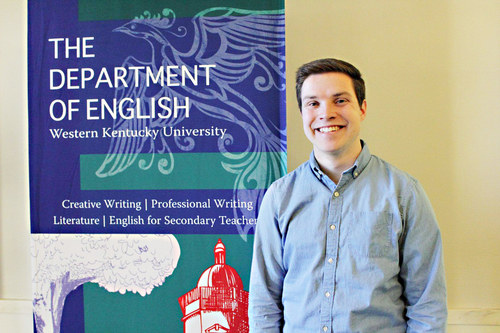 English Department graduate Zachary Zimmerer (’19) received two full scholarships to pursue his law degree. Zimmerer was accepted to the University of Louisville and the University of Information Technology, and received scholarships to Ohio State University and Indiana University. Ultimately, he chose Indiana University. Dr. Rob Hale, Head of the English Department, commented, “I was fortunate enough to have Zach in three classes at WKU, so I know what a capable and hardworking student he is. I could not be prouder of this wonderful accomplishment.”

Zimmerer attributes his success to his outstanding LSAT (Law School Admissions Test) score. Logical reasoning, analytical reasoning, reading comprehension, and a writing sample are the four main sections of the LSAT, and experience as an English major provided a strong learning base to achieve a high LSAT score.  “I earned a score I was proud of, and I think much of that had to do with my ability to read and process information quickly and efficiently,” Zimmerer said. “The time I spent reading for my English classes helped prepare me for the type of quick reading I had to do on the test.  If you can do a close analysis of Shakespeare for an exam, you can answer some multiple choice questions on a short passage.”

Zimmerer is pursuing law because the idea of specializing in an area of study appeals to him. “I find the idea of specializing in a specific area of knowledge very appealing. With literature, I sometimes felt like I was reading just a bit of everything.  I’m excited to really get into the gritty details of one area of the law. This desire also comes from a place of wanting to give to others.  I recognize that even having the opportunity to attend a law school—let alone graduate without additional debt—is an immense privilege.”

Zimmerer also believes his background in English will benefit him while in law school, especially when it comes to the heavy reading load assigned to law students. “I’ve heard horror stories from those that never had to do intensive reading during college.” With his background in English, Zimmerer hopes the sheer amount of reading won’t overwhelm him. He will also have to learn and adjust to reading the law, something his time in the English Department may help with.

Of all the lessons Zimmerer has learned in the English Department, he claimed that his ability to empathize with others was the greatest lesson he learned with the department. “The most fulfilling parts of my time in the WKU English Department were the many opportunities I had to be exposed to people, cultures, viewpoints, and ideas I hadn’t encountered before,” said Zimmerer. “I can point to all the practical tools and skills my English degree helped cultivate in me, but the biggest impact this department has had is helping me to better empathize with others.  I really hope that this ability has made me a better person.”

Zimmerer, who will begin law school at Indiana University in the fall of 2019, said that the people he has met in his four years at WKU will be what he misses the most. During his time at WKU he built relationships with professors and other students in the department. “WKU has been a very special place for me and the people it brought into my life played a major part in the person I have become.” Zimmerer also stated that as a former English student with a concentration in literature, John Steinbeck’s East of Eden is his favorite work. “The idea that all people have the capacity to be good and overcome is one that holds a lot of meaning for me,” a sentiment that will hopefully carry him through his career in law.

Zimmerer also offered advice to English majors interested in pursuing law, “Develop good study and reading habits now.  Having a strong foundation in close reading can be a big help as the things you read become more complicated and abstract.”

For more information about the many careers open to English majors, please visit our website or contact Dr. Rob Hale.