There and Back Again with Dr. Davies | Western Kentucky University Skip to main content

There and Back Again with Dr. Davies 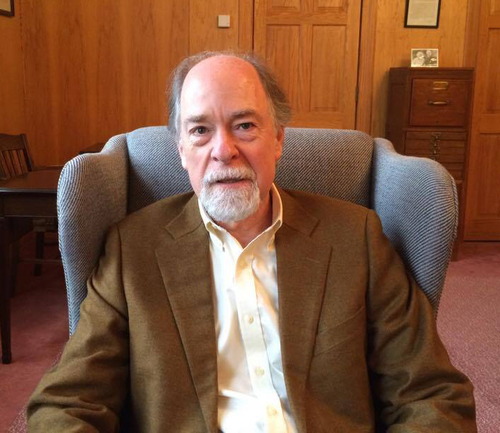 “The Road goes ever on and on
Out from the door where it began.
Now far ahead the Road has gone.
Let others follow, if they can!
Let them a journey new begin.”
--A Walking Song, J.R.R. Tolkien

After 29 years of full-time teaching, Dr. Lloyd Davies entered transitional retirement in January of this year. Though Dr. Davies was moving into a smaller office, the walls of his old office were still lined with meticulously organized books. Reminiscing about a professor who had influenced him, he pushed up his glasses before pointing to a book: “Ah, here—Frederic Jameson. He would come into class with a book in hand, but then he would just talk. He would think out loud, about whatever it was he had on his mind as we listened in rapt attention to this great thinker.”

Dr. Davies didn’t always want to be an English professor. His journey began at the California Institute of the Arts, where he studied Classical Piano. “I didn't really think I was going to be a professional pianist,” said Davies. “I just loved piano and wanted to play as well as I could.” After graduating in 1973 with a BFA in Piano Performance, Davies decided he had taken his love for piano as far as he wanted. It was time to go on to new adventures, and court an old love—literature: “My other love was literature, so I studied Comparative Literature at the University of California, Riverside, earning a B.A. in 1979. Even then, I didn’t think I was going to be a college professor. I just knew I loved reading and writing about literature. Literature was where I felt really comfortable.”

Davies moved on to Toronto, Canada, where he earned an M.A. in Philosophical Aesthetics at the Institute for Christian Studies in 1986. Lastly, Davies earned his Ph.D. in Literature from Duke University in 1993—and the long road ahead of him had only just begun. During his studies, Davies married and had three children. He had decided to earn a doctorate in Literature to not only “master the art of being a student of literature,” but to provide for his growing family.

Davies began teaching at WKU in 1990. Adjusting to being a professor was difficult at first. “I was an extremely shy and nervous teacher at the beginning,” said Davies. “I didn't like being in a situation in which all eyes were on me. I had some growing into it to do.” The growing began as soon as he was confronted with a room full of students. Davies has since perfected his teaching style, and his confidence has grown. “I practice a more traditional style of teaching. It’s a lecture, but without any prepared notes that I am reading. Often, I just talk about what we're studying. I'm the expert with the training and I expect my students to listen.’” This method of instruction is modeled after Frederic Jameson, Davies’ favorite professor at Duke.

Over the years, Davies has developed a method of teaching writing that includes a one-page commentary exercise with specific requirements, as well as a shorter quotation exercise. These exercises have since been adopted by several teachers and English Department alumni, who describe the exercises as an “eye-opening” way to study a text.

While teaching, Davies is also continually writing papers and attending conferences, often in distant locations such as England or Israel. For one of his sabbaticals he was granted permission to access the private library of Israeli professor Harold Fisch, who developed an interpretive methodology for literary study that he called covenantal hermeneutics. As a professor in the field of Romanticism, Davies considered this a great honor.

Davies has many passions, and looks forward to pursuing them as his transition to retirement begins. He began his career by pursuing his passions, became a professor, and is now pursuing them again—there and back again. “At this point, in the transition between teaching and retirement, I have a much reduced schedule,” said Davies. “I'll have time to do some of the projects that I've only worked on around the edges during my teaching career.” These include topics such as Fisch’s covenantal hermeneutics and the ideas of French philosopher Jean-Luc Marion. The concept linking these two thinkers is a famous one—love. “An underlying current throughout my career has been the subject of love,” said Davies. “Love is a great literary topic, certainly for the Romantics, and others that I've enjoyed teaching, such as Shakespeare and John Donne.” Davies is currently exploring the dynamics of Marion’s phenomenology of love in reference to biblical texts. “It’s fantastic, and a lot of fun. I'm working like crazy on that.”

Davies intends to lead an active life during his transitional retirement. Only days after moving his boxes of books into his new small office, Davies and his wife left for France. They will be in Paris for three weeks and then take a train to Manchester, England, where Davies will attend the International Conference of Romanticism, of which he is the current President. He will then go on to teach at Harlaxton College during fall semester. One of his classes is on the topic of Fantasy literature, including a unit covering the works of J.R.R Tolkien. Enjoy retirement, Dr. Davies!

Kentucky Gov. Andy Beshear has announced that registration for Phase 1C of the COVID-19 vaccine will open on Monday, March 1. Phase 1C includes faculty and staff at colleges and universities.