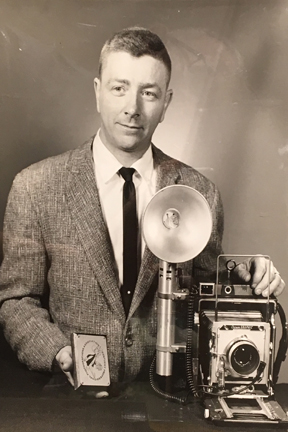 The Department of Library Special Collections (DLSC) opened a new exhibit on July 1 in the Kentucky Building’s Jackson Gallery titled “Picture Perfect:  The Wedding Photography of Thomas W. Hughes.”  The exhibit is built around thirteen enlarged photographs that were taken by Bowling Green professional photographer Tommy W. Hughes.  These images are part of a larger collection of Hughes’ wedding photography donated to DLSC by his daughter Amy Wood.  “During my father's years as a professional photographer,” Amy Wood recalls, “he photographed over a 1,000 weddings.  He wore a suit and tie, polished his dress shoes and often judged a wedding on the quality of the reception food.  His equipment was heavy and bulky and in the days of film, each image was essential.”

Hughes, a native of Savannah, grew up in nearby Simpson County, attended Western Kentucky University, opened his Bowling Green studio in 1970 and worked from there until his retirement over 35 years later.  Included in the exhibit is a case documenting Hughes which includes one of his large format cameras, an advertisement declaring that his studio loved wedding photography, photographs of him, and some of the commendations his work received.

Nancy Richey, the Special Collections Images Librarian, tried to select photographs that represented the entire community.  “Great photographers,” Richey notes, “see not only with a camera but with their eyes and heart. It was in this way that Hughes captured these couples’ special days. Selecting these images among the many that were donated was difficult, but we wanted to capture the diversity of his work.”  Photographs of several African American weddings are included as well as themed weddings, a double wedding, and traditional weddings that date back to the early-1970s.  One of the favorites with visitors is a couple in which the man is dressed and posed as Pee Wee Herman.

To supplement Hughes’ photos, cases are filled with wedding invitations, vintage wedding photos, etiquette books related to weddings, greeting cards, wedding books, and information and images related to weddings in Mammoth Cave, Kentucky, including a rare painting by Bowling Green photographer and artist Clement Reeves Edwards showing the Bridal Altar cave formation and a group of what is speculated to be a wedding party.  Upon requesting campus wedding photos, exhibit organizers were overwhelmed by more than one hundred images, including WKU weddings held on campus and other WKU-related photographs with Big Red cakes, red towels, and more representing Hilltopper pride.