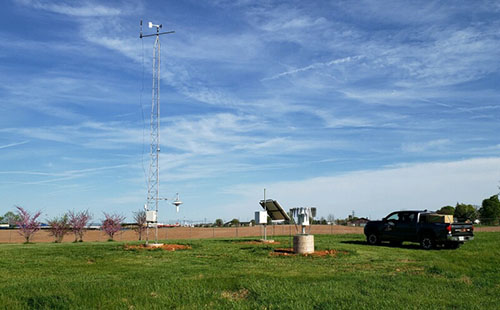 The Kentucky Mesonet at WKU has relocated one of its Warren County stations to Ephram White Park.

“This new site is a relocation of the station near General Motors Corvette plant that had been struck by lightning and that had been impacted by construction in that area,” said Dr. Stuart Foster, director of the Kentucky Mesonet at WKU and the Kentucky Climate Center. “With the growing population, nearby schools and industrial park, we felt it was important to keep coverage in that area so we worked with Chris Kummer and Warren County Parks and Recreation and partnered with them on the site at Ephram White Park.”

The park is located at 885 Mount Olivet Road. The Mesonet station collects real-time data on temperature, precipitation, humidity, barometric pressure, solar radiation, soil moisture, soil temperature, wind speed and direction and transmits it to the Kentucky Climate Center at WKU every five minutes, 24 hours per day, throughout the year. The data is available online at www.kymesonet.org.

“From our perspective, the partnership with Warren County Parks and Recreation made sense because they had public property that provided a high-quality site that will allow us to collect accurate and representative data,” Dr. Foster said. “From their perspective, it provides an on-site source of weather information related to the activities at the park.

“We appreciate the opportunity to work with the GM Corvette plant and the support they provided on the initial site for the station as a benefit for the community.”