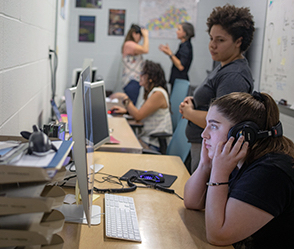 Dr. Ashley Stinnett, assistant professor of anthropology, was selected to receive the 2019 Office of Scholar Development Mentor Award. All WKU students who applied for nationally competitive scholarships during the academic year were invited to nominate their mentors. Dr. Stinnett was selected from an impressive group of deeply engaged scholars and committed mentors. Mentors like Dr. Stinnett play significant roles in the professional development of students. They share life experiences through informal relationships outside the classroom that seek to elevate students to peers.

“Dr. Stinnett has been immensely helpful throughout my undergraduate career. I came to her as a freshman with a thesis idea much too ambitious for someone at my level, and she still managed to walk with me through the entire process. We met twice weekly since then and every time I learned something new. She's been a great support system, as well as a great resource to help me understand academia better. She offers up her lab space for student use, regardless of if they need to complete work or just want to hang out and eat lunch. She challenges students while still being empathetic and helpful. Most importantly, she is great at guiding students in a way that displays and refines their abilities and goals, rather than changing them. Dr. Stinnett is a great mentor, professor, researcher, and person.”

Dr. Stinnett chaired Ms. Gilliam’s Honors thesis committee, and she guided Ms. Gilliam in preparing to present results of the thesis research, which was supported by an international FUSE (Faculty-Undergraduate Student Engagement) grant, at the WKU Student Research Conference, Posters-at-the Capital, Kentucky Honors Roundtable, and the annual meeting of the American Anthropological Association. They are preparing a manuscript for submission to the Journal of Sociolinguistics. Ms. Gilliam also worked as an undergraduate research assistant in Dr. Stinnett’s Ethnographic Visual Production Lab.

Since joining the WKU faculty in 2015, Dr. Stinnett has served as a mentor to a number of students. She supervised original FUSE-funded research by two other students who also presented their work at national conferences. Dr. Stinnett served on a Master’s thesis committee and supervised several student directed studies. Dr. Stinnett encourages undergraduate and graduate students in her ethnographic video production course to disseminate their visual ethnographies on a YouTube channel she maintains. One graduate student’s film was selected for screening at the Society for Visual Anthropology Film and Media Festival.

Dr. Stinnett is a cultural anthropologist with extensive training and research experience in linguistic anthropology, visual anthropology, and applied anthropology. Her PhD is from the University of Arizona, where she worked as a lecturer in the School of Anthropology and a post-doctoral research associate with the Bureau of Applied Research in Anthropology (BARA) before coming to WKU. Dr. Stinnett does research on food systems in the United States, the United Kingdom, and the Netherlands, focusing on heritage butchers, community farmers, food banks and pantries, kosher production, and occupational discourse.

The Office of Scholar Development at WKU assists students on all campuses and in all majors and degree programs apply for nationally competitive scholarships, and it encourages research, creative activities, and engagement outside of the classroom to help students become independent, engaged scholars. OSD has presented a mentorship award to a faculty member each year since 2016. The award includes $250 in professional development funds.