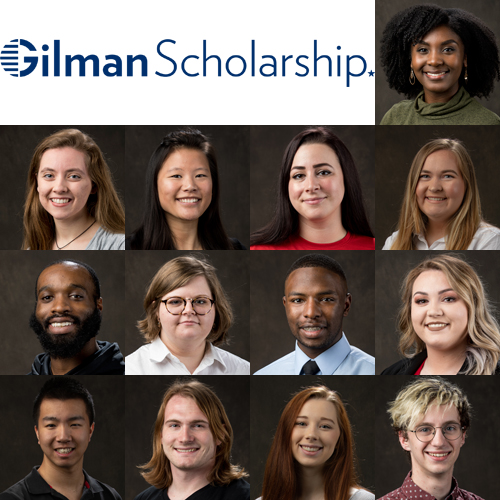 Ar’meishia “Mimi” Burrow of Hendersonville, Tennessee is the daughter of Meia Townsend and majors in Spanish and Dance. She will study Spanish language and culture in Segovia, Spain this summer.

Caroline Camfield of Fisherville majors in mechanical engineering. She will study engineering at Universidad del Norte in Barranquilla, Colombia this summer.

Rebekah Cardwell of Lawrenceburg is the daughter of Lynn Cardwell and has majors in exercise science and Spanish. She will study Latin American civilization and Spanish for medical professionals in Merida, Mexico this summer.

Andrea Day of Bowling Green is the sister of Catherine Swinford and Madison Bevarly and majors in international affairs and Arabic. She will study Arabic language in Amman, Jordan this summer.

Joseph Johnson of Owensboro is the son of Aleta Butler, Robert Johnson, and the late Elizabeth Johnson and majors in military leadership and Chinese. He declined his Gilman Scholarship to accept a U.S. Department of State Critical Language Scholarship in China.

McKenzie Johnson of Dawson Springs is the daughter of Linda and Henry Johnson and majors in anthropology and art history. She will study at the University of Roehampton in the United Kingdom this summer.

Damon Mansfield of Radcliff is the son of Sekela Thornton and is a nursing major. He will study nursing and social work in Tanzania this summer.

Ie Meh of Bowling Green is the daughter of Klaw Meh and Bu Reh and majors in biology. She will study at Hanyang International Summer School in Seoul, South Korea.

Alexandra Rusher of Bowling Green is the granddaughter of Geneva and Dwight Payton and majors in international affairs and Arabic. She will study Middle East studies in Amman, Jordan this summer.

Reuben Tang of Glasgow is the son of Yue Rong Li and Zhen Tang. He will complete an internship with architectural firm Kris Yao Artech in Taipei, Taiwan this summer.

Barry Washer of Morgantown is the son of Marion and Barry C. Washer and majors in music. He will study music history and literature in Salzburg, Austria this summer.

Myah Young of Crestwood is the daughter of Michele and Jay Williams and is a nursing major. She will study nursing and social work in Tanzania this summer.

Max Zambrano of Owensboro is the son of Dana Hamilton and majors in political science. He will study Middle East politics and society in Morocco this summer.

The following students were designated alternates:

Emily Falica of Scottsville is the daughter of Michelle and Anthony Falica. She will study Korean language at Yonsei University in Seoul, South Korea this summer.

Kerby Gilstrap of Bowling Green is the daughter of Kimberly Gilstrap. She will study Arabic language in Rabat, Morocco this summer.

Funded by the U.S. Department of State, the Gilman Scholarship has enabled more than 25,000 outstanding Americans of diverse backgrounds, including ethnic minorities, students studying science, technology, engineering and mathematic, and students with disabilities, to engage in a meaningful educational experience abroad since 2001. The program has successfully broadened U.S. participation in study abroad, while emphasizing countries and regions where fewer Americans traditionally study.

Students worked with staff in the Office of Scholar Development and the Office of Study Abroad and Global Learning to prepare their applications and find the best academic program abroad to fit their goals.