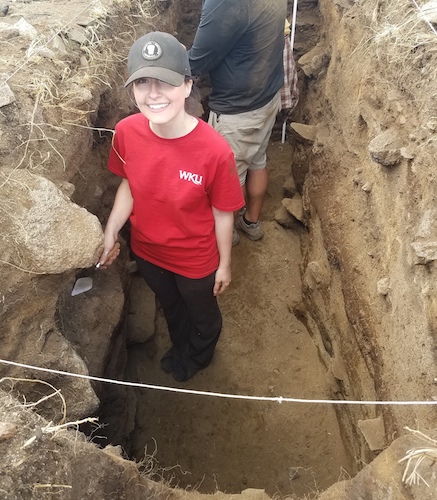 In April 2019, Jennifer N. Molchan of the Department of Folk Studies and Anthropology was awarded a competitive $2,000 Field Research Fellowship from the American Center for Mongolian Studies, a non-profit educational organization that supports academic projects and exchanges in Mongolia and the Inner Asian region. Working in-field with international scholars and students this summer, her research project involves analyzing ancient ceramics from the Khanuy Valley of north-central Mongolia.

Jenn’s ceramic analysis will contribute to the Western Mongolia Archaeology Project, a collaborative scientific initiative led over the last decade by WKU’s Dr. Jean-Luc Houle and Dr. Jamsranjav Bayarsaikhan of the National Museum of Mongolia. The ongoing research investigates human-environment relationships on the Mongolian steppe, which nomadic pastoralists continue to inhabit today, and the development of complex societies during the Bronze and Iron Ages.

Previous studies of ancient ceramics from the Khanuy Valley have focused on macroscopic characteristics such as vessel forms and decorative styles. Jenn’s project is the first to examine microscopic properties, namely the composition of the clay matrix or “paste” of ceramic sherds recovered from Bronze and Iron Age archaeological sites in the valley. She seeks to document how the paste “recipe” varied over time and what those differences tell us about changes in technology, settlement, trade networks, and culture contact. Jenn is using a portable Dyno-Lite digital microscope, which allows for non-destructive collection of data such as elemental composition from the ceramic artifacts. Further, Jenn notes her project is significant because “it will be the first ceramic study for Turkic period sites in the region.”

Jenn’s findings will be incorporated into the larger regional research project. She will prepare an atlas of paste types over time, which will be included in a future monograph about the Western Mongolia Archaeology Project. She also plans to present the results at an academic conference. Jenn’s grant-supported work in Mongolia builds on a directed study she completed this year under the supervision of Dr. Houle, in which she created an atlas of ceramic pastes for prehistoric pottery from Kentucky, using specimens curated at the WKU Anthropology Lab.

This spring Jenn graduated cum laude with a BA degree in anthropology (archaeology concentration) and a minor in folklore. After earning an associate’s degree in health specialization from Northern Essex Community College in Massachusetts, Jenn relocated to the Fort Campbell area. She selected WKU from among other universities in the region because of the Anthropology Program and opportunities to gain archaeology field experience outside the United States. In 2018 Jenn did just that, completing a summer archaeology field school in Mongolia, where she fell in love with the peoples and cultures – past and present – of the steppe. She is excited to return to Mongolia in 2019.

Jenn made a big impact in the Anthropology Program during her short time at WKU. She served as treasurer of the Anthropology Club and is a member of the WKU chapter of Lambda Alpha, the national anthropology honorary society. In March she presented research on continuities and changes in pastoralist lifeways in Mongolia at the WKU Student Research Conference. Partnering with other students, Jenn co-created a traveling poster exhibit and companion website for the Kentucky Musical Legacy Project, a collaboration between WKU’s Kentucky Folklife Program and Kentucky Museum. She volunteered at Living Archaeology Weekend and on the University of Kentucky Shell Midden Archaeological Project. The anthropology faculty selected her as the recipient of the 2018-2019 Outstanding Anthropology Graduate in the Archaeology Concentration Award.

Jenn plans to continue her studies of anthropology in preparation for a career as a archaeologist. She is applying to the graduate program at the University of North Carolina-Chapel Hill.

The American Center for Mongolian Studies represents a consortium of over 40 academic institutions active in the field of Mongolian studies. It supports scholars working in all fields of study related to Mongolia, and its main office in Ulaanbaatar serves as a central meeting place for Mongolian and international academics. The Center regularly sponsors Mongolia-related events in the United States and Canada, such as a speaker series, academic conferences, and workshops. Since its founding, the Center has provided more than $2.4 million in support of Mongolian studies programs.

The Center’s Field Research Fellowship Program has supported Mongolian scholars for almost a decade. With funding from the US State Department Educational and Cultural Affairs Bureau and the Council of American Overseas Research Centers, each year the program provides awards of up to $4,000 to approximately four-eight students, post-docs, or faculty to conduct short-term field research in Mongolia. It is noteworthy that Jenn Molchan, an undergraduate student, was awarded one of these competitive fellowships. Her field research project will be conducted in conjunction with Dr. Houle, her research sponsor, and will involve at least six weeks of fieldwork in Mongolia.