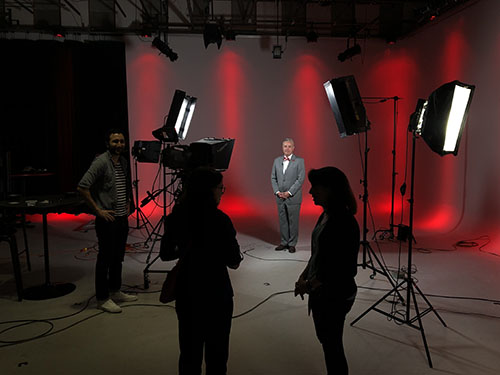 The selected students are members of the Kelly Autism Program’s Circle of Support, a unit within the Suzanne Vitale Clinical Education Complex at WKU that assists university students on the autism spectrum.

As the rate of diagnosed individuals with ASD increases each year – currently 1 in 59 – there is a growing need to develop employment opportunities for these individuals as they transition permanently to the workforce. The endowed Brinkley Fellowship, created in 2018, supports each fellow for his or her first year of student employment. They then transition to part-time student employment supported by WKU Public Broadcasting.

“It is an honor to welcome these students to the WKU Public Broadcasting team,” said David Brinkley, director of WKU Public Broadcasting. “They enter our operation with diverse interests and skills that will have a positive impact on our operations. We feel privileged to offer this opportunity and address the critical need to provide employment and practical-skills training for college students with ASD.”

“WKU Public Broadcasting is deeply invested in supporting and training students,” Mary Lloyd Moore said when the fellowship program was initially announced. Moore is executive director of the Suzanne Vitale Clinical Education Complex. “I can’t think of a better organization or group of professionals to guide our ASD students and help them successfully transition to the post-graduate workforce.”

For more than 30 years, WKU Public Broadcasting has trained students in the areas of television and radio production and operations, employing an average of 36 students each year. Professional staff of both WKU PBS and WKU Public Radio work with students to develop their skills in a variety of areas. WKU has the only joint-licensed (television and radio) public media stations in the Commonwealth.

WKU Public Broadcasting intends to take its experiences with training ASD students and create a replicable model for other businesses, organizations and public broadcasting entities to implement.

“It’s not enough to simply provide this training opportunity for ASD students,” Brinkley said. “We want to serve as educators and advocates to increase understanding and acceptance of autism spectrum disorder within our communities. By doing that, we create a platform for learning and workforce development success.”