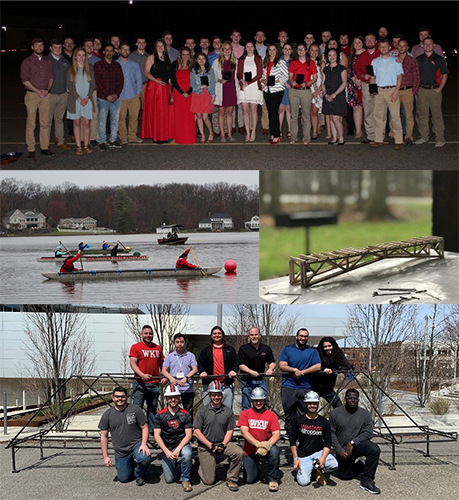 WKU civil engineering students have had their most impressive year to date.

The civil engineering student organization, the American Society of Civil Engineers (ASCE), encourages outreach, community service, hosting events and attendance at national ASCE events. Over the course of the 2018 calendar year, WKU students increased ASCE membership by 350 percent, increased meeting attendance by 200 percent, hosted 12 professional speaker, and worked charity events such as the Tractor Pull to Feed the Kids, the Potter’s Home Stocking Stuffer and a Habitat for Humanity build. As a result of their efforts, WKU ASCE was awarded the Most Improved Student Chapter and nominated as a Ridgeway Award finalist out of more than 350 ASCE student chapters worldwide. The Ridgeway Award is given the best overall student chapter. WKU is one of the five schools to be named a Ridgeway Award finalist; the Ridgeway Award will be announced in May.

WKU’s concrete canoe team excelled in the main event of the ASCE competition in all categories, placing first in Design Paper, Oral Presentation, Final Product, Women’s Sprint, Women’s Slalom, and Co-ed races, while placing second in the Men’s Sprint and Men’s Slalom races. This gave WKU a final total of 99 out of 100 possible points, dethroning 2018 regional champion and fifth place team at the 2018 National Concrete Canoe Competition, Youngstown State University. The ASCE OVSC Regional win qualifies WKU concrete canoe team to compete June 6 in the National Concrete Canoe Competition in Melbourne, Florida.  The team’s goal is to place Top 5 at nationals for the second time in four years. This will mark WKU’s 16th appearance at the national competition.

WKU also competed in the OVSC AISC Steel Bridge competition on April 13. Youngstown State University won the competition with an innovative truss bridge design. The only other school featuring a truss bridge was WKU; the remaining bridges featured a beam bridge design, including two that collapsed during the load test. WKU’s sleek and slender bridge pushed the limits of strength, stability and lightweight truss design. Six WKU bridge builders constructed the bridge quickly at just over 16 minutes. WKU’s bridge team passed the lateral load test, but during the last 100 pounds of the 2,500-pound vertical load test, the bridge laterally swayed just out of a set boundary and was disqualified. While this was not the students’ desired outcome, faculty advisor Dr. Shane Palmquist was pleased with the students’ performance, pushing the envelope of truss bridge design and construction. The WKU Bridge team worked tirelessly to design, fabricate and construct a very competitive truss bridge.

The bridge and canoe will be on display on the main floor of WKU Engineering and Biological Sciences Building.