WKU Senior Provides a Stitch of Hope to the Local Community 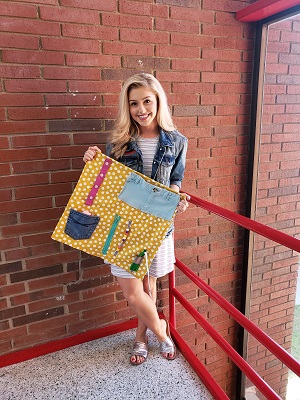 Caring for others is deep rooted for WKU senior, Haley Wheeler. She recently made a generous donation of handmade activity mats for therapeutic use at local Bowling Green nursing homes through WKU’s Center for Applied Science in Health and Aging (CASHA).

After shadowing a health professional in elementary school, the spring grad knew that becoming a speech-language pathologist was her dream career where she could truly make a difference and support others in need. “I’ve circulated around a few career options, they were always based in medicine or health and human services in general. I told my mom early on that I wanted to help people, it’s something I’ve always wanted to do,” says Wheeler.

Wheeler grew up in the Red River Gorge area of Eastern Kentucky but calls Bowling Green her second home, “It was a good decision to come here [WKU], I’ve grown so much in the last four years and am grateful to have such a diverse environment,” she said.

After watching her grandfather’s experience with Alzheimer’s disease, she made it her mission to support those with neurological conditions. “My great-grandfather passed away from Alzheimer’s disease, that really changed my perspective on what I wanted to do for my career. I thought, ‘there has to be a way to make the end of life easier, for not only the patient, but their families, their circle and doctors.’” From this, the Stitch of Hope project was created.

Wheeler began her studies in palliative care here at WKU through her pursuit of a Bachelor’s of Science in Communication Disorders. She returns this fall to obtain her Master’s in speech-language pathology.

After much research, Wheeler found the benefit of providing tangible objects for patients with neurological disorders. “Increasing the quality of life is the goal,” says Wheeler. “Periods of lucidity can sometimes be very short. I created activity mats that would allow patients to rebuild with something they’re familiar with. The simple act of buttoning your pants becomes very difficult for a person suffering with dementia.”

The activity mats feature buttons, zippers, beads and ribbon to allow its user to connect with a familiar situation in an environment where they may feel unfamiliar, such as a nursing home. Through the Stitch of Hope project, Wheeler believes the mats can boost memory, retention and longevity. “They can increase patient independence and joy, which in the long run, can increase their quality of life,” she said. “I wish my grandfather would’ve had something like this, I think he would’ve really enjoyed it.”

Stitch of Hope is a passion project created by Wheeler, but she credits her instructors for much of the success. “I’m very thankful for Dr. Neil Strunjas and Dr. Crandall for understanding that this project isn’t temporary for me, I’ll be pursing this for the rest of my career. That’s what is so great about WKU, there is always someone that is going to believe in you and what you have to offer.”

Those interested in making donations to support the Stitch of Hope project should reach out to Haley via email, haleybwheeler1212@gmail.com.