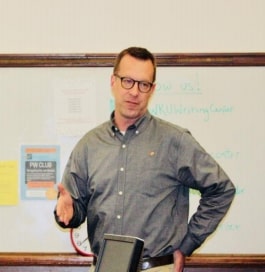 Joseph Kirkpatrick, Founder and President of KirkpatrickPrice, a national internet security firm that conducts audits for businesses around the country, welcomed students to the first meeting of the Western Kentucky Professional Writing Club this semester with the story of how he came to see the value of professional writers.

One afternoon, he received a call from a disgruntled client about an audit KP had done for him. Kirkpatrick examined his auditor’s report, and he realized he needed his highly skilled specialists to focus on what they did best, which is auditing. He also realized he needed to employ highly skilled writers to do what they are trained to do, which is to think, communicate, and write logically.

It was this sentiment that led him to partner with Western Kentucky University to create the PW Club in order to assist aspiring writers from all genres in becoming more effective writers and more desirable employees upon graduation. Each month the club meets in Cherry Hall and students focus and receive feedback on topics such as resume writing and networking.

Although geared toward English majors, students of all degrees are welcomed and encouraged to attend the workshops. WKU students are incredibly fortunate to have a business owner so willing to spend time on campus freely exchanging ideas and advice. Often many current KP employees, wh Students waiting for Mr. Kirkpatrick to begin the meeting. September’s theme focused on tools for students to navigate the multitude of job postings graduating students find online.

Topics such as using internet search filters, tailoring a resume to a specific job, and portraying projects created while in school on a resume were all part of a highly informative meeting. Two key elements of the job search that Kirkpatrick found of importance are the need to create a strong, professional media presence and to learn the art of person to person connections, also known as “networking the old-fashioned way.”

Mr. Kirkpatrick told of helping his own son network to find his first job this past summer. His son was initially hesitant to create a list and begin cold calling potential employers, but then Kirkpatrick told him” I’m not going to do this for you, you’ll never learn until you try.” Within a week, his son had two job offers, and remains still employed at the one he chose.

Students attending the meeting were asked to begin making a list of their own connections and start interacting with people outside of their normal daily routines. By starting now, students may feel the stress of finding a job after graduation can be lessened somewhat. As far as a professional site, LinkedIn remains one of the most valuable tools a student can use.

Everyone was encouraged to create a profile and to begin learning how to navigate the website. Kirkpatrick concluded the meeting by sharing his belief in how important it is for students to invest time in themselves and develop skills outside of those related to their major.

Being involved in campus activities and seeking out mentors can strengthen both hard and soft skills students need to successfully transition from a collegiate setting to the workforce. Mr. Joseph Kirkpatrick discusses using Google filters.

Students interested in learning more about the PW Club are invited to attend the next meeting, held on the second Thursday of each month in Cherry Hall, or contact Dr. Angela Jones - Associate Professor and Coordinator, Internship Program.