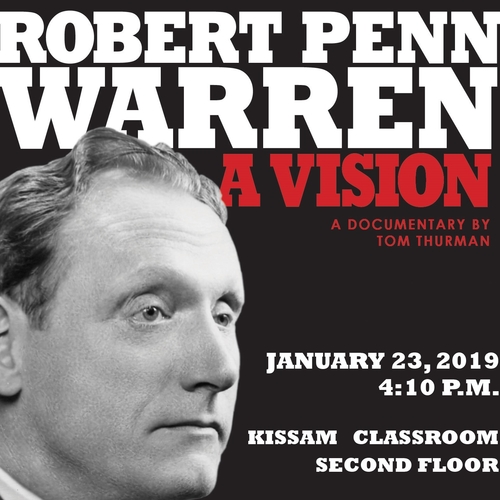 Behind every great novel lies a great author, and Robert Penn Warren is no exception. Known for his Pulitzer Prize-winning novel All the King’s Men, Robert Penn Warren is perhaps the most well-known writer to come out of Kentucky. Like any other great historical figure, however, there is more to this man than meets the eye.

Producer Tom Thurman set out to show the world the man behind the page with his upcoming KET original documentary entitled Robert Penn Warren: A Vision. “All the King’s Men tends to overshadow the other works,” says Thurman. There’s much more to be mined here, and I’m hoping people will watch the documentary and be inspired to dig deeper on their own.”

Although the documentary aims to give viewers an in-depth look at Robert Penn Warren and his many works, Thurman says the original inspiration for his documentary came from All the King’s Men. “I read All the King’s Men 36 years ago, and it struck me with the same force as the major works of Faulkner and Ellison’s Invisible Man.”

Throughout the course of making the documentary, several obstacles impeded progress, but Thurman says that those obstacles are what made the experience so special. “Obstacles along the way do not interfere with the journey; they are the journey,” Thurman says. “I’ll give you one example: licensing of footage…. Negotiating those rights was not an easy task given the fees they were initially asking. So in addition to research and development, creative and technical issues, I have to also navigate my way through legal issues as well. But it’s worth the trouble in the end.”

Viewers of the documentary will learn that Robert Penn Warren was not only a writer, but also a historian and civil rights activist as well. Perhaps the biggest takeaway for Thurman, however, was Warren’s character. “[T]hroughout it all, he remained a very decent man, a good husband and a wonderful father,” says Thurman. “That might be the most impressive of all.”

Robert Penn Warren: A Vision will premiere Monday, October 22 from 6:30- 8:00 PM CT at Van Meter Hall on Western Kentucky University’s campus. The event is free, but reservations are required. There will be a light reception afterwards hosted by the Kentucky Humanities Council and a Q&A session with producer Tom Thurman and Rosanna Warren, poet and daughter of Robert Penn Warren.

The documentary is set to debut on broadcast media on October 29 at 9 PM EST/8 PM CT on KET. Reservations for the premiere can be made at https://www.ket.org/event/robert-penn-warren-bowling-green.