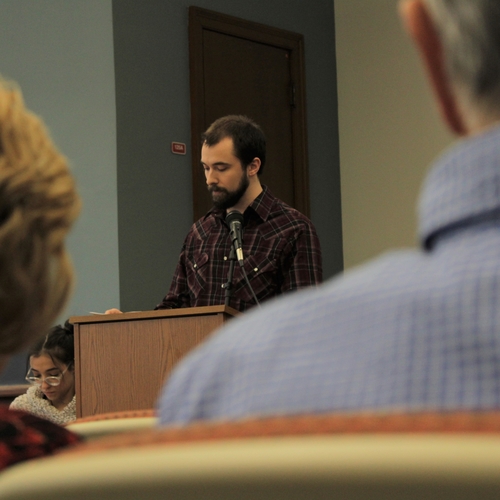 The Undergraduate Conference on Literature, Language, and Culture is an annual event sponsored by the WKU English department, with generous support from the Provost's Initiatives for Excellence. The conference features original analytical essays written by undergraduate students.

Students are invited to submit short (five page) versions of any paper they have written in a WKU English class during the year leading up to each conference. Graduate students in the English M.A. program evaluate the submissions and select up to fifteen participants. Those students selected are featured in one of several moderated panels for fellow classmates and professors to listen and engage in a question and answer session afterwards.

This year panels included Spirituality and Religion: From Literature to Lifestyle; Matters of Self; Gender Roles in Media and Literature; Intimacy, Creativity, and Spirituality in Nature; and Watch Your Language: It’s Vulgar, Animated, and Endangered. Many students presented papers that had been created for their senior capstone classes. A few of the highlights included Cameron Fontes exploring the connection between father figures by disassembling the poem “My God, It’s Full of Stars” by Tracy K. Smith. Fontes saw similarity in his own paternal relationship when choosing this piece to read.

Collin Massie read his thoughts on the increasing popularity of the ideas of Satan among college students through television and movies in his paper “On Satan and the Concept of Good.” Massie presented his ideas of why good seems boring, while evil seems exciting. Celeste N. Rehmel discussed what she called moral therapeutic deism in “Young Adult Literature and the Church.” Rehmel believes current young adult religious fiction does not offer any real and relatable characters and a career writing more realistic young Christian fiction after graduation is possible.

Creating Collin Massie reading "On Satan and the Concept of Good.” relatable religious literary characters can be difficult; however, she still finds it an interesting field to enter. Iman Zaghahriet spoke about her personal beliefs about her religion titled “The Modern-Day Hijab is a Choice,” and shared how the origins of the hijab were to protect women, yet in modern times it can make a woman a target instead. The irony of the idea of the protection of the hijab is still relevant in today’s world as women cover themselves to remove temptation from men, but the behavior of men is not held into account. Zaghahriet made the decision to remove her hijab in the belief that a cloth covering her hair did not dictate her faith.

Ann-Meguiar Bouldin offered her argument that students who procrastinate are not lazy, but are perfectionists in “Putting Off Perfection.” The common assumption has long been that a student who waits until the last minute to start a paper or a project is not engaged in their classes or dedicated to their schoolwork. “Perfectionism can manifest in many ways and students cannot always cope with unrealized, but anticipated failure.” If channeled properly, perfectionism can become a good academic tool, but educators and students must recognize and learn strategies to work through the idea of perfectionism in college students.

The Undergraduate Conference is an important event because it allows English majors the opportunity to read aloud what they have written in a public forum and develop strong public speaking skills to accompany their writing. For further information, please contact Dr. Ted Hovet. The next opportunity for students to share their original papers will be in the spring semester with publication in either The Ashen Egg or Zephyrus.