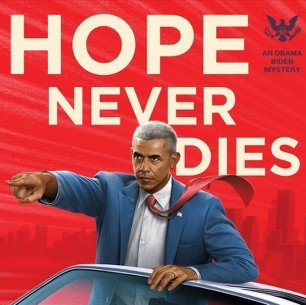 A joint effort by the WKU Library and the WKU Department of English allowed New York Times Best Selling Author Andrew Shaffer to share his humor and wit with faculty and students alike Thursday evening at a book signing event in Cherry Hall. Shaffer’s writing style includes the use of parody and satire, and his latest book Hope Never Dies is no exception.

In the days leading up to the Oval Office transition from President Obama to President Trump, the internet was flooded with memes of President Obama and Vice-President Biden. After the transition of power, there was still a media presence surrounding Obama, but there seemed to be little about Biden’s move to the private sector. From these memes and a curiosity about what Joe Biden might be doing with his time, Shaffer produced the idea to create a novel about life after the White House told from the perspective of Biden and pitched it to his agent.

Hope Never Dies was born, and Shaffer has plans for the sequel Hope Rides Again, already in the works. Originally from Cedar Rapids, Iowa, Shaffer is now a resident of Lexington, Kentucky. He studied English at the University of Iowa and worked with many of the graduate students at the Iowa Writer’s Workshop to hone his writing skills. It was not until fifteen years later that he saw commercial success and worked in the corporate business world before devoting himself to full time writing.

Shaffer did share two great writing tips for students planning careers in the writing field. He believes a good writer will “schedule time every day to write” and he encouraged students to embrace the editing process. He explained that all authors undergo editing. “Every time I work with an editor it makes my writing better.”