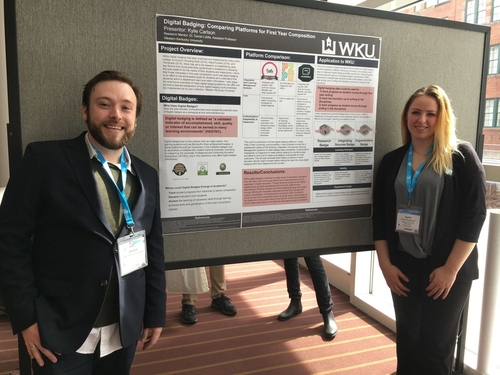 Earlier this March, senior Kylie Carlson – a professional writing major from Cadiz, Kentucky – presented her research project at the annual Conference on College Composition and Communication (CCCC) in Pittsburgh, Pennsylvania. CCCC is a major conference in rhetoric and composition attended by higher education faculty from across the country. Kylie presented her research on digital badging and her proposal for implementing it in first year English courses at WKU. After graduating in May, Kylie will attend Clemson University where she will study writing rhetoric and media.

Presenting at CCCC was not always the plan for Kylie. Her mentor for the project, Dr. Dan Liddle, is who encouraged her to apply. He wanted Kylie to get more experience in the field so that she could figure out what she wanted from a graduate program, and that is exactly what she did. While finding what it was that she wanted to research, Kylie came across digital badging. As a tutor, Kylie was excited to have found something that she could introduce to her students that would make them feel like their academic goals are more achievable.

“Digital badging often reminds them of when you play Xbox and you get the achievements. That’s essentially what digital badging is. So to introduce that in academia would be much more of an intrinsic motivator than grades or things like that,” says Kylie. “My research was based in introducing digital badging into first year English courses. I compared platforms that host the digital badging credentials and then I made a mock proposal about how we would implement it at WKU.”

Presenting at a major conference as an undergraduate student was certainly a nerve-wracking experience for Kylie. Each undergraduate presenter makes a poster for people to look at in a separate section of the conference.

“Basically we make these giant posters and then we tack them up on boards,” Kylie explains. “It was a lot of standing there and having people read your poster or people saying, ‘Alright, give me the spiel.’ It was all of these professors, writing directors, graduate students, and even undergrad students that you stand next to that would ask, ‘What are you doing?’ It was really cool!”

Kylie believes that conferences like CCCC and research based on rhetoric and composition are incredibly important regardless of the field you are in.

“I think our world has a very old school view of what we do. So for conferences like these, I think they’re super important for understanding ways that we can apply rhetoric to literally anything,” Kylie explains. “To be able to have these conferences and to have these conversations about how to introduce rhetoric and composition into other fields like technology can help people realize that our practices are relevant.”