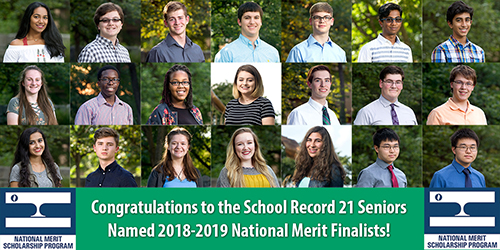 Twenty-one seniors from The Gatton Academy of Mathematics and Science in Kentucky have been recognized as finalists in the 2019 National Merit Scholarship Competition, marking the most students recognized in one school year in the school’s history.

The 2018-2019 National Merit Finalists from The Gatton Academy are:

To become a Finalist, a Semifinalist and their school had to submit a detailed scholarship application, which provides information about a student’s academic record, participation in school and community activities, demonstrated leadership abilities, employment, and honors and awards received.  A finalist must have an outstanding academic record throughout their high school career, be endorsed and recommended by a high school official, write an essay, and earn SAT® scores that confirm the student’s earlier performance on the qualifying test.  From the approximately 16,000 semifinalists, about 15,000 are expected to advance to the Finalist level.

More than 1.6 million juniors entered the 2019 National Merit Scholarship Program by taking the 2017 Preliminary SAT/National Merit Scholarship Qualifying Test (PSAT/NMSQT®), which served as the initial screen of program entrants.  From this list comes the nationwide pool of Semifinalists, representing less than one percent of U.S. high school seniors, and includes the highest scoring entrants in each state.  The number of Semifinalists in a state is proportional to the state’s percentage of the national total of graduating seniors

“The Gatton Academy staff and I offer these students a heartfelt congratulations. We are honored to work with such outstanding students every day,” stated Dr. Lynette Breedlove, Director of The Gatton Academy. “The best part is the students are remarkable in many ways beyond their academic prowess.”