WKU Board of Regents approves tuition, fees for 2019-20 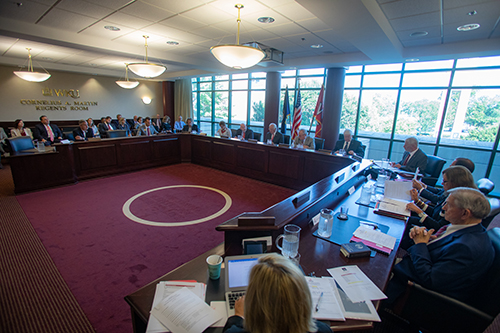 The WKU Board of Regents on Friday approved tuition and mandatory fees for 2019-20.

Beginning with the fall 2019 semester, tuition for Kentucky undergraduate students will increase 2 percent, or $100, to $5,401 per semester. Nonresident and international undergraduate rates will remain unchanged.

WKU President Timothy C. Caboni said the university is employing strategies to keep WKU affordable, including moving more financial aid to students who need it the most. “We have to make sure that everyone who wants a WKU experience can get one regardless of their family’s economic situation,” he said.

President Caboni said it is too easy to look at “sticker price,” or published tuition rates, and not at the net cost of all expenses minus aid. At WKU, the average net cost is $11,817 per year, which he said is less than many other universities in Kentucky.

“When you look at net cost, we are incredibly competitive and a tremendous value,” he said.