View from the Hill: The WKU Commons at Helm Library 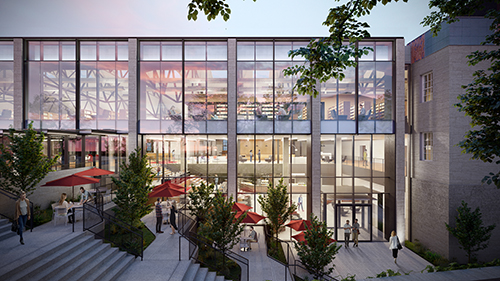 WKU has unveiled plans for a transformational project at the top of the Hill.

Dining options, coffee, study spaces -- it’s all coming to Helm Library. Over the next two years, the space will be turned into The WKU Commons at Helm Library, a space WKU President Timothy C. Caboni calls the intellectual hub of campus.

WKU's Amy Bingham has the details in this week’s View from the Hill.

Helm Library is about to undergo a big transformation.

“The building right now is in a lot of little layers so we’ll be punching through the floors to allow more connectivity between the different floors.”

“We’re going to be opening up the third floor on the top so we’ll be opening up to skylights so there will be a lot of emphasis and focus on natural lighting.”

Dean of Libraries Susann deVries and student representative Will Harris were part of a larger committee seeking input on the WKU Commons since last summer.

“We want to make sure some of the needs of students are addressed completely, making group study rooms, collaborative spaces.”

“We really relied on those surveys and then I did a lot of outreach with SGA and different clubs I’m involved in. “

Harris says preserving the basketball court jump circle in the new design will help hold on to some of Helm Library’s rich history.

“Get to see Helm Library as more of the original Big Red Barn that E.A. Diddle got to coach in.”

Making The WKU Commons at Helm Library a destination point at the top of the Hill.

“People can get coffee and talk about a project and students and faculty can meet together in a warm, welcoming environment.”

“It’s going to be the hub of campus,  that harnesses the social and powers the spirit and as the tag of WKU says, the spirit makes the master.”

The project is a collaboration with Aramark/Restaurant Group and University Libraries. deVries says work will begin this summer and the project is expected to be complete by spring of 2021.