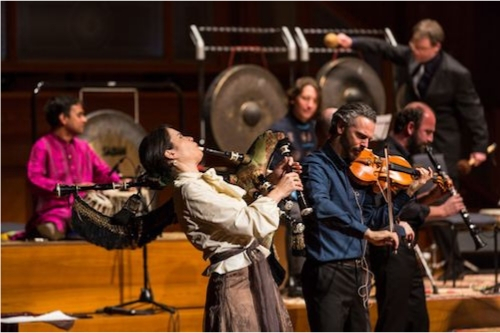 The Silkroad Ensemble seeks to use the background of its musicians to collaborate cross-culturally and challenge our learning processes to build a more hopeful world through the music they create. The Silkroad Ensemble was founded by cellist Yo-Yo Ma, and the musicians and composers hail from more than 20 countries, have performed in over 100 cities in more than 30 countries, and recorded seven albums.

Described by the Vancouver Sun as “one of the 21st century’s greatest ensembles,” Silkroad musicians create an atmosphere of familiarity and unfamiliarity to reflect the myriad of identities that exist in the modern world. Whether they perform in groups of two in intimate spaces or 18 in large public gatherings, the Silkroad Ensemble creates an evening of unforgettable music, international collaboration, and passionate entertainment.

Admission is free to the campus and public. No tickets are required, but seating will be offered on a first-come, first-serve basis.

More information about the Cultural Enhancement Series can be found at www.wku.edu/go/ces or on facebook or twitter @wkuces.