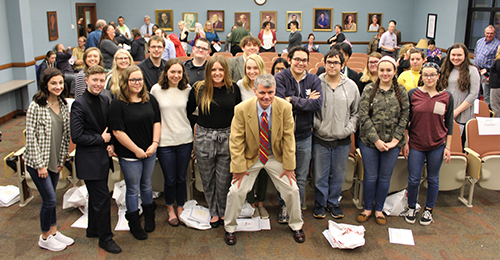 The WKU English Department honored nine winners in its Second Annual Essay Contest at a reception on Wednesday (Feb. 6).

Junior English major Jessica McCormick spoke at the celebration and discussed her path in choosing WKU and the English major. Dr. Ted Hovet read “You Were Sleeping While it Happened,” a poem by the late Mary Ellen Miller, the first poet laureate of WKU and a professor in the WKU English Department for over 50 years. The students who entered the Literature Essay contest analyzed this poem.

The English Department was excited to see a large increase in participation in the second year of the contest. “High school teachers are doing outstanding work in our region, and we wanted to honor them and the excellent writing that their students are producing,” said Dr. Rob Hale, department head. “We were pleased to have such significant growth in the number of entries this year and look for more growth as word gets out next year.”

Higher Education in Student Affairs student, Robin Lester (?21), is heavily involved in the planning and implementation of events and programs for LGBTQ+ History Month.

The Role of Literature in Environmental Activism