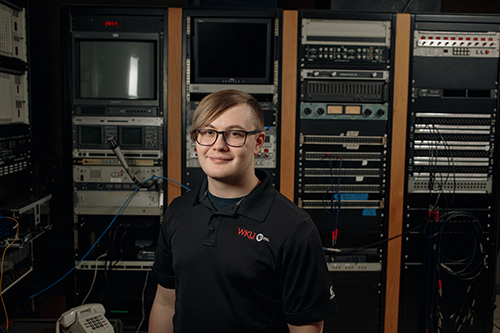 WKU senior Elijah Smith of Fancy Farm has found a way to overlap two of his biggest passions, television production and video games.

Smith decided to come to WKU for its top-notch broadcasting and journalism program. Landing a job at the PBS station was icing on the cake. Now in his senior year, Smith is taking full advantage of every opportunity.

WKU's Amy Bingham explains in this week’s View from the Hill.

“I work super hard for the things I’m passionate about.”

You can say that again. Not many students go all the way to California to interview the man who invented Spacewar in 1962 for a class project in field production.

“I literally bought a ticket to Mountain View, went there, arranged the interview, shot it there then got some footage of me and him playing the game together. “

“I think my love for video games is something that creatively drives me for what I want to do in the future.”

Next up, Smith is editing a documentary on his hometown, Fancy Farm.

“I want to show people what else this town has to offer besides political stump speaking. I think it’s going to be a really great story, anxious for it to come out.”

He says these projects wouldn’t be possible without the full support of his employer WKU PBS where he’s been working since he arrived on campus.

“It was during MASTER Plan I literally walked in here and filled out an application to see what would happen and here I am now.”

Smith will graduate in May and plans to stay in Bowling Green for the next six months to a year continuing to build his resume.  After that he hopes to take his career to Austin, Texas.