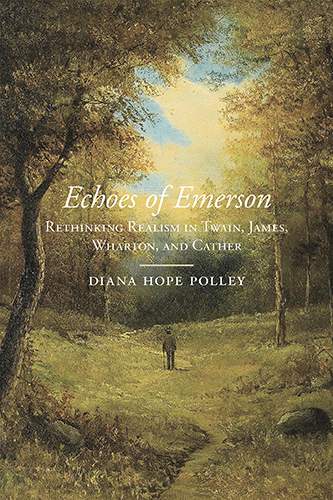 Echoes of Emerson: Rethinking Realism in Twain, James, Wharton, and Cather, written by Diana Hope Polley and published by the University of Alabama Press, has been selected as the 2018 winner of the Robert Penn Warren-Cleanth Brooks Award for outstanding literary scholarship and criticism.

In Echoes of Emerson, Polley traces the complex and unexplored relationship between American realism and the philosophy of Ralph Waldo Emerson. Rather than accept the distinct boundaries between romance and realism, Polley argues that American realists struggled between celebrating Emerson’s romantic philosophy and acknowledging the stark “realities” of American social and historical life. She does so by offering close readings of Mark Twain’s Adventures of Huckleberry Finn, Henry James’s The Portrait of a Lady, Edith Wharton’s The House of Mirth, and Willa Cather’s My Ántonia—all through the lens of Emersonian philosophy and discourse. The book award selection committee was deeply impressed with Polley’s innovative use of close reading, a technique that Brooks and Warren advocated through critical texts like Understanding Poetry (1938).

Polley is Professor of English at Southern New Hampshire University. In addition to Echoes of Emerson her publications include “Americanizing Cather: Myth and Fiction in My Ántonia,” anthologized in Harold Bloom’s Modern Critical Interpretations series, specifically in Willa Cather’s My Ántonia (2008). She is working on a digital critical edition of J. Hector St. John de Crevecoeur’s Letter’s from an American Farmer and has begun a monograph, “Cowboys and Capitalists,” which explores shifting representations of masculinity in late 19th century American literature. Polley earned her Ph.D. in English at the Graduate Center at the City University of New York.