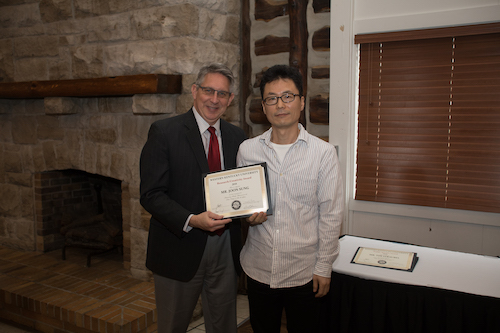 Chosen for outstanding contributions in Research/Creativity within the Potter College of Arts and Letters, Professor Joon Sung received the Faculty Award in the spring of 2018. Professor Sung is a Professor in the Art Department, Digital Media, and Computer Animation. His portfolio boasts a number of exhibitions and screenings on the local, national, and regional scales. Professor Sung was pleased and honored to receive the award. His art focuses on experimentation with a quest for another type of beauty that is intellectually demanding and aesthetically progressive. “My recent works are largely characterized by a strong emphasis on minimalist styles, rooted in the monochrome art movement in Korea and Japan, predominantly in simple forms and in limited color schemes through which I seek for the genuine beauty what I believe,” Professor Sung explained.

Professor Sung received funding from the PCAL Faculty Research Grant and Faculty Scholarships for three artistic projects: "Tokyo Concerto", "The Song", and "Englishes". "Tokyo Concerto" is comprised of 21 pieces of video cataloguing Professor Sung’s video diary entries made while exploring the extremely populated city of Tokyo during his sabbatical in 2013. “The intent of the productions was aesthetic rather than journalistic in nature,” Professor Sung said.

"The Song" is a feature-length documentary about the traditional Korean funeral song, “Sangyo-Sori.” This project took Professor Sung years to complete and was made possible through the funding of the PCAL Regular Scholarship provided by the Office of Sponsored Programs and the Department of Film at Yong In University, which allowed Professor Sung to use their film equipment in Korea. “I also owe lots of thanks to the many people who had helped out with this film, especially June Kyu Park and Sang-Jin Byun who traveled with me around the southern part of Korea and captured the video footage and recorded the sounds. Neal Williams wrote a brilliant film score, professor Ingrid Cartwright took the role of assistant writer and Josh Marble contributed his expertise on this film as a technical advisor,” said Professor Sung.

Professor Sung has collaborated with students in some of his creative works. One such work was a 52-minute documentary entitled "Englishes", which focuses on English pronunciation by non-native American English speakers. Professor Sung credits WKU students, faculty, and staff, as well as the International Center of Kentucky in helping complete this film. It received an Honorable Mention in the Documentary Short Category at the 2009 Los Angeles Reel Film Festival.

Originally from South Korea, Professor Sung arrived at WKU after working as a creative designer for a company in New Jersey. “I found that I was missing academic environment where I can work with students and produce non-profit driven works,” said Professor Sung. Professor Sung has a number of works in progress. Previews of these and his previous works are available for viewing at his personal WKU page.