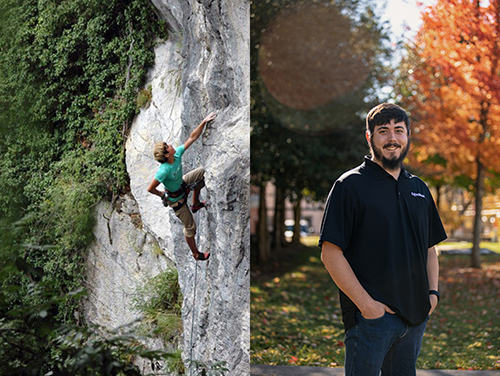 From rock climber to Hilltopper, the journey to the top has been worth the climb for WKU graduate student Mike Arthur.

Arthur is wrapping up a college career that began in 2009 with several zigzags along the way. He received his bachelor’s degree in Montana and has earned his master’s degree in geoscience at WKU. In early 2019 he will begin work as an exploration geologist for Exxon Mobil in Houston, Texas.

“I took my unique path but I finally got to where I want to be,” he said.

‘I wanted to make a change’

“When I was younger I was rock climbing a lot and traveling and I got to go to many different places but school wasn’t something that was always at the forefront. So when I got to college I didn’t exactly know what I wanted to do so I spent a lot of time taking all sorts of different classes. As a result I didn’t do so hot in school. My grades were horrible. So then I ended up kind of floating around between community college and things like that and realized I didn’t want to work the jobs I was working for the rest of my life. I wanted to make a change.”

That change meant moving from San Francisco, where he had been living with his father, to Missoula, Montana, where he received his bachelor of science degree in geosciences at the University of Montana.

Looking for an opportunity

“I went from being a really bad student to being a 4.0 student. There just kind of chomping at the bit to learn as much and get the degree and then I just jumped on whatever opportunity I could get. I applied to grad schools my senior year and I didn’t get in anywhere. I was pretty upset but I knew I wasn’t going to stop. So I ended up asking for opportunities around the department. I asked to be people’s field assistant to go out in the field, anything to pad my resume.”

He began applying for graduate school again and connected with Dr. Royhan Gani.

From Montana to WKU

“I’m also a firm believer that it’s not really exactly where you go, it’s kind of what you do while you’re there. I think being a motivated person has a whole lot more than just being attached to a big name university. So Dr. Gani brought me here.”

“I had not heard of WKU before. I had been in Kentucky before. When I was climbing I had been in eastern Kentucky at the Red River Gorge. It was Dr. Royhan Gani. I had actually applied with him at a different university. He basically emailed me back and said ‘you have a great package but I’m actually switching universities. So I can’t take you.’ I said, ‘OK at least I got positive feedback from that one.’ Then a couple of months later he actually emailed me and said, ‘Hey I’m at my new university now. Would you like to submit your package? And we’ll see if maybe you can be a fit down here.’ I came and visited but I didn’t know much about WKU at all. I just knew the opportunity was there. He specifically told me he wanted to start an IBA team here which was something that I wanted to do even before I was here. He said if you come you can kind of lead the team and we can just give it a go and see what happens. So that was exciting for me.”

Making connections with an industry leader

WKU’s first Imperial Barrel Award team won the Eastern Section and was one of 12 teams that advanced to the world competition in Houston. “We didn’t win but that got our name out there,” Arthur said.

Through the IBA team, Arthur made connections with Exxon Mobil that led to an internship and then a full-time position.

“On the very last day I got kind of an informal ‘You did really well. We’ll be talking to you soon.’ So I had no idea and I came back here. I felt good about what I did and I felt like I put everything I had into it so if it didn’t work out at least I put everything out there. Then I was actually driving to school and was in the parking lot walking up and I got a call from the head recruiter telling me. I was just ecstatic. It’s many, many years of hard work that finally comes together for something like that and to get to work for such a magnificent company as Exxon Mobil. They’re an industry leader, and more than that the people are great. It’s really special to be a part of that especially coming after such a long process.”

This month, Arthur and his wife, Shelby, are moving to Texas. She’s been part of his journey for the past several years.

“I couldn’t do it without her. I dedicated my thesis to her. She is just like the rock for me. Even being driven and knowing what you want it’s really  nice to have someone at your home that says things like ‘I love you,’ ‘You can do this.’ She doesn’t know but she thinks I’m the smartest and best person in the world. That’s what she tells me. It’s great to have somebody like that. I’m just happy it’s paying off.”

Dr. Gani said Arthur’s success is an example of the high-quality teaching and research that are hallmarks of the WKU student-centered experience.

“At WKU, we challenge students like Mike to achieve their full potential and transform their lives. Mike’s hobby is rock climbing, and as a Hilltopper, he indeed learned well how to climb to success. For many geology students, starting a career in a top oil and gas company with a world-class research lab and lucrative six-figure salary is a dream job. It is deeply satisfying to see that our students like Mike can land in these dream jobs, jobs that are commonly grabbed by students only at the top-notch programs in the nation.

“When we design a course or a research project, we think about the students first.  At WKU in geosciences, we prepare students with applied research training, involving them with hands-on, real-world examples. Through our high-quality teaching and research like the Imperial Barrel Award program, WKU provided a rare platform for Mike to shine in the national spotlight and ultimately be hired by the world’s largest oil and gas company.”

Opening the path for other students

Arthur credits Dr. Gani and the WKU geosciences program with making the difference in his career path.

“There’s no chance I would be where I am if I hadn’t have come here. Everything happens for a reason. We made a choice to come here and we made every effort and we gave everything we had to it. Thanks to Royhan, thanks to the department, thanks to all the people here we’ve gotten to where I’m at. Hopefully other students can go this path too. We’re successful in meteorology. We’re successful in water and karst landscape. We do so many things in this department and this is a new thing we can add. We can also put out exploration geologists if they want to do it. That gives a lot of options to new incoming students that they can be whatever kind of geoscientist they want.”

The journey to the top was worth the climb

Arthur has a message for students who might be struggling like he did when he began his college career in 2009.

“First I would tell them that it’s normal. I don’t know if it is. Maybe it isn’t. But it was for me. I actually had a student a couple of weeks ago come and ask me about this. Really good kid. Smart kid. But you know sometimes school is just hard. I just try to make sure people have a goal. I think that was it for me. When I first went to school I was just there. I didn’t have a goal. I knew I wanted to get a degree but I didn’t have something I wanted to pour my energy into. When I went the second time I treated it like it was a job because to me it was. My job was to go there, get a degree, get good grades so I could get the career I wanted so I could take care of my family. So I tell people to keep goal in mind. It’s not that the chemistry class is hard and you can’t get the grades. It’s that you want to be a geoscientist so you need to do what you can to be a geoscientist. If that means staying late, if that means going to the teacher, if that means coming to me, you just do whatever it takes. You have to work as hard as you possibly can. If you do it all and it doesn’t work out, at least you’ve done everything. There’s nothing worse than looking back and being like ‘I could have tried harder.’ I think just be driven and ask for help. That’s fine. Know what you want and go get it.”