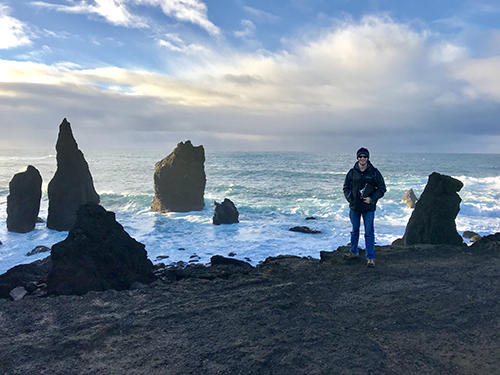 WKU graduate student Jason Fox traveled to Iceland recently to present at the Arctic Circle Assembly and to complete thesis research at sites along Iceland's southern coast, including Valahnúkamöl near the Reykjanes Lighthouse.

Jason Fox of Russellville, a graduate student in the WKU Center for Human GeoEnvironmental Studies (CHNGES) and Department of Geography and Geology, recently traveled to Iceland to present at the annual Arctic Circle Assembly conference and to complete thesis research along Iceland’s southern coast evaluating the environmental impact of tourism activity and development at climate-vulnerable natural attractions.

The Arctic Circle Assembly, held Oct. 19-21 in Reykjavik, is the largest annual forum for international dialogue on Arctic issues, science and political discourse. The Assembly brought together delegation from across the globe, including the eight Arctic states, the European Union and the East Asian states of China, South Korea and Japan. The Assembly convened just after a new United Nations climate report sounded a grave warning of the oncoming global consequences of a warming climate, and the Arctic region and its peoples will be among the first to bear the brunt of these effects. Climate change also brings economic potential to the Arctic as the Northern Sea Route, historically restricted by ice, is now open to trading ships as a shorter route for international commerce between Asia, Europe and North America. Keynote speakers at the Assembly discussed their country’s commitments to further Arctic research and to cooperate with other nations concerning utilization of the Northern Sea Route.

Fox presented his own research at the Assembly, sharing the results of his recently completed WKU Honors thesis for the first time to the scientific community and other Arctic stakeholders. Fox discussed his recent choral composition, Icelandic Sketches: Stories of Climate, Tourism, and Change, premiered by the WKU Chorale in Spring 2018, and the research behind the piece. The music depicted multiple narratives of climate change and tourism in Iceland, and the corresponding surveys of the singers and audience members provided some of the scientific literature’s first data-backed evidence demonstrating music’s ability to serve as a platform for environmental communication.

After the Assembly concluded, Fox headed for the southern coast of Iceland to complete a portion of his ongoing graduate thesis research. Accompanied by research assistant and recent WKU alumna Sydney Herndon, Fox completed 13 applications of his new environmental index designed to evaluate the severity of tourism’s environmental impacts at water-based tourism sites in cold-climate regions. The index was applied at a variety of sites, including glacial lagoons, waterfalls, and beaches. Fox will use the results of these applications to improve the design of the index, which he hopes will serve as a useful management and research tool for minimizing and mitigating tourism’s environmental footprint. Such a tool is highly important as many cold-climate regions like Iceland and the broader Arctic witness record numbers of yearly visitors while also facing the magnified effects of climate change, leaving landscapes vulnerable to both natural and man-made change.

“It is so exciting to have Jason share his research with colleagues at the Arctic Circle meeting,” said Dr. Leslie North, Assistant Professor of Environmental Geoscience and faculty advisor for Fox. “This assembly brings together a large community of public officials, scholars, industry representatives and students to discuss one of the most pressing environmental issues of modern time. It was an honor for all of us to have Jason’s work invited to the Moving Forward by Learning from Each Other breakout session and panel discussion. And, to follow-up a great meeting with the initiation of his next exciting project was icing on the cake. I can’t wait to see what comes next.”

Dr. Fred Siewers, Chair of the Department of Geography and Geology, added: “The work Jason Fox is doing in Iceland is excellent and impressive. His presentation at the Arctic Circle meeting, his invited participation in a break out session at the meeting, and his continued field research all add to Jason’s record of accomplishment and the excellent work being done in the Department’s CHNGES Center.”