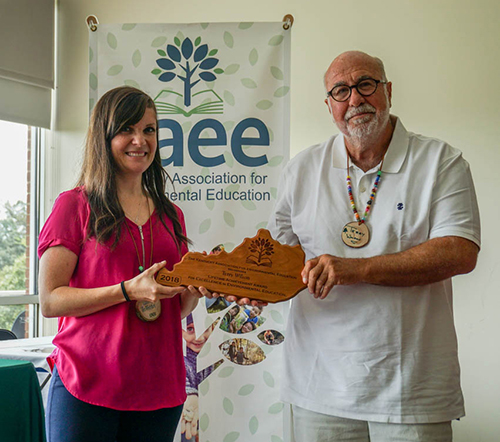 “I am so thankful to KAEE for this amazing recognition, and I’m reminded that the work of educating people about and in the environment must continue with our new generation of environmental educators,” Dr. Wilson said.

The Excellence in Environmental Education awards are presented annually by KAEE to recognize those individuals and entities that best exemplify dedication, commitment, and influence in the field of environmental education. Recipients are nominated by colleagues, partners, KAEE members or the general public.

“It is an honor to have this opportunity to share the exceptional achievements of our award winners and the work they are doing to educate and provide a better future for all Kentuckians,” Ashley Hoffman, executive director of KAEE, said in announcing the awards.

Dr. Wilson spent most of his career specializing in teacher and leadership training in environmental education. Besides working with thousands of teachers in Kentucky and much of the United States, he has also conducted extensive international training in environmental education for educators and natural resource managers throughout North American, South America, Asia and Europe.

Born and raised in Ohio, Dr. Wilson became a teacher and director of the Outdoor Education Program for the Madison Local Schools (Mansfield) in 1970. This marked the beginning of a career developing and implementing science and environmental education programs which spanned 47 years.

Dr. Wilson was the first college professor in the United States to receive the GREEN Educator Award, given by Earth Force, Inc. and the General Motors Foundation.  He also received the President’s Award for Sustainability at WKU in 2013.

About the KAEE: Since 1976, the Kentucky Association for Environmental Education has worked to build a sustainable environment through education.  KAEE initiates, leads, participates in and supports projects and programs that advance the role of environmental education in promoting systemic change in educational achievement and addressing natural resource management issues. KAEE is committed to ensuring that all Kentuckians have the opportunity to learn about and connect with the environment where they live and to actively participate in building healthy, sustainable communities. For information, contact Ashley Hoffman, Executive Director, at director@kaee.org