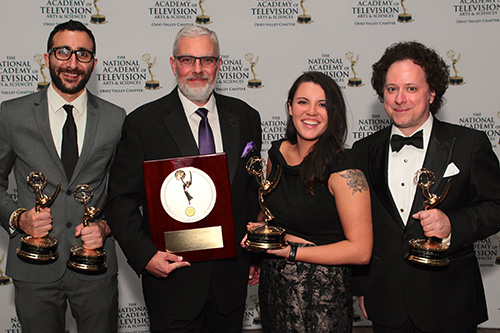 Work on the WKU PBS series Lost River Sessions (LRS) was recognized with Emmy Awards in two categories. In the Arts/Entertainment – Program category, Darius Barati (’07), Neil Purcell (’15), Kelli Brock (’17), and Jeff Petrocelli accepted awards for their collective work on the show. For Brock and Petrocelli, this was their first Emmy Award. In the craft category of Lighting, Barati was also recognized with an award for his LRS efforts.

"It was a wonderful night for Lost River Sessions (LRS) and WKU PBS. To see Kelli Brock and Jeff Petrocelli win their first Emmy was an honor and a testament to the incredible team we’ve assembled here with our professional staff and student crew.  Especially with David Brinkley and Robbin Taylor, who’ve both played a major role in our station’s success, in attendance," Barati said. "From my time studying under David Brinkley as a student at WKU, to eventually becoming a full-time producer at WKU PBS, he has been an inspiration and a guiding force for myself and the team here.  He’s created an environment that has allowed myself, our crew, and our students to flourish.”

Brock added, “When I heard our names called, I was completely in awe. This has been a dream come true and getting to work alongside people who you respect and love makes it even more fulfilling. WKU PBS has taught me so much that I will continue to use throughout my career.”

Petrocelli, after his second nomination and first win, said, “It is truly an honor to be recognized for our work on Lost River Sessions, and I'm very grateful to WKU PBS for the opportunity.  I can't wait to start shooting season four. "

Purcell said, “Lost River Sessions has been fortunate be recognized with several Emmy Awards over the years but this one is really special for me and hopefully the rest of the crew. This award is not just a recognition of a single component being outstanding but of the entire show being one that is great for the audience and for our peers.”

Brinkley, Director of Public Broadcasting, was inducted into the Silver Circle, one of the highest honors given by the Ohio Valley Chapter of National Academy of Television Arts & Sciences. In his acceptance speech, he touted the station’s student-centered approach.

“At WKU PBS we have made it our mission to help students, through applied research, and prepare them for our evolving industry,” he said. “I hope that they learn the lesson that when they obtain employment in this industry, it is because so many people invested their time and energy in each of them, helping them to grow and learn just like so many did for me.”

Robbin Taylor, WKU’s vice president of Public Affairs, said the WKU PBS team “is an incredibly talented group of men and women who mentor students and serve our regional communities. They love doing the Lost River Sessions series and this is well-deserved recognition for the energy, time and passion they bring to this program. We're especially proud of the 25-year service recognition for David, who is richly deserving for his devotion to WKU PBS and the students who train there.”

The Emmy awards judge entries on their own merits and do not compare entries to one another. It is for that reason that the Emmys are unique because there can be one award, more than one award, or no award given in any given category. The Emmy Award is the highest award given in the television industry and is considered the TV equivalent to the Academy Awards (for film), Grammy Awards (for music) and Tony Awards (for stage).

WKU’s Public Television Service has been nominated in each of the past 15 years, receiving 25 awards and has three Silver Circle Inductees.