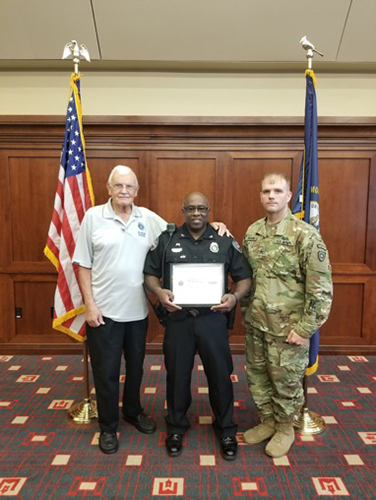 Employer Support of the Guard and Reserve (ESGR), a Department of Defense Office, seeks to foster a culture in which all employers support and value the employment and military service of members of the National Guard and Reserve in the United States. ESGR does this by advocating mutually beneficial initiatives; recognizing outstanding employer support; increasing awareness of applicable laws and policies; resolving potential conflicts between employers and their Service members; and acting as the employers' principle advocate within DOD. ESGR accomplishes this through Educating, Recognizing, Mediation and Advocation.

The presentation of the DOD "Patriot Award" to WKU Police Chief Mitchell Walker is being made in appreciation for the outstanding support he has provided to Sgt. Dwight C. Bushong of the 1103rd Military Police Detachment of the Kentucky National Guard. He states that during his employment with the WKU Police Department he has been impressed with the outstanding support he has received including the fact  that Chief Walker supports him in all of his National Guard events, including Weaponcraft instructions, State Marksmen ship team duty's, schools, Drill, AT and much more. “Due to Chief Walker's support I am a firearms instructor and he supports my continued education so that it can, both benefit the Department and the Guard. Chief Walker has expressed his strong desire to fully support the men and women who give so much of their time, energy, talent, and love to both their civilian jobs and to their duty in the military. He continues to make it known to the entire Police Force at WKU that any member of the department who serves in the guard or reserve has his full support and he expects them to provide their full support as well."

This is the reason that Chief Mitchell Walker has earned the right to be so recognized and awarded the Department of Defense/ ESGR "Patriot Award.”

It should be noted that since September 11, 2001, more than 16,000 National Guard and Reserve members, from the area, have left their families and employers to serve in overseas contingency operations. ESGR advocates relevant initiatives, recognizes outstanding support, increases awareness of applicable laws, and resolves conflict between service members and their employers.