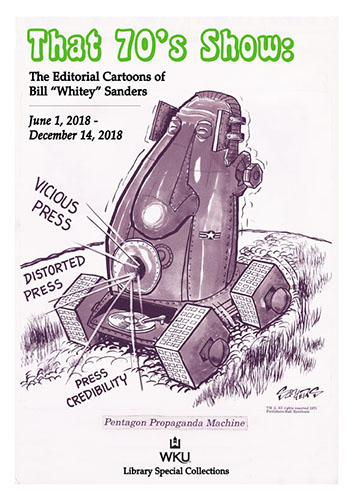 A new exhibit containing editorial cartoons and other memorabilia related to WKU alumnus Bill “Whitey” Sanders has opened in the Jackson Gallery on the second floor of the Kentucky Building.  Titled That 70s Show:  The Editorial Cartoon of Bill Sanders, the exhibit features nearly thirty Sanders cartoons from WKU’s Department of Library Special Collections.  Since his first donation of drawings to Special Collections in the early-1970s, Sanders has given well over 1,000 cartoons that stretch from the 1960s to around 2012.  He continues to draw, and he still donates cartoons to the collection.  A brand new book featuring Sanders’ cartoons Against the Grain:  Bombthrowing in the Fine Art of American Political Cartooning joins several other books that showcase Sanders’ deft cartooning. “I am so pleased that we are able to stage an exhibit containing items from one of our most prominent collections,” remarked Special Collections Department Head, Jonathan Jeffrey.  “The quality and quantity of drawings in this collection is a testimony to Sanders’ skill, wit and generosity.”

“That 70s Show” features Sanders’ cartoons from the 1970s with special emphasis on material related to Watergate, the Vietnam War and turmoil in Southeast Asia, environment issues, domestic unrest, and international relations.  The exhibit runs through December 14.  Sandy Staebell, Assistant Professor and Kentucky Museum Curator orchestrated the exhibit.  She notes “The exhibit is a time capsule that offers a window into many of the issues that were of greatest concern in the 1970s and provides an opportunity to revisit one of the most tumultuous and important decades in American history.”  She adds:  “What is perhaps most striking about these cartoons is that although some of them were drawn nearly 50 years ago, the issues they address are relevant today.”

Born in Springfield, Tennessee, Bill “Whitey” Sanders attended Western Kentucky State College and graduated with a Bachelors degree in English.  He was a quarterback on the Hilltopper football team, and as a senior he set an NCAA passing record, completing nearly 67% of his passes.  While at Western, he was a member of the ROTC and spent leisure moments sketching.  He joined the U.S. Army after graduation to satisfy his ROTC commitments.

Sanders has always maintained close ties to his alma mater.  Not only has he donated hundreds of his cartoons to Library Special Collections, Sanders has returned to campus to talk with journalism students about the art of cartooning the role of journalists in American Society.  In 1997, he was inducted into WKU’s Hall of Distinguished Alumni, and in 2002 the Kentucky Museum featured his work in the exhibit, Bill “Whitey Sanders’ Comic Opera. Go to https://digitalcommons.wku.edu/billsanders_political_toons/ to see the entire gallery on TopSCHOLAR --WKU's repository of scholarly works and creative input.