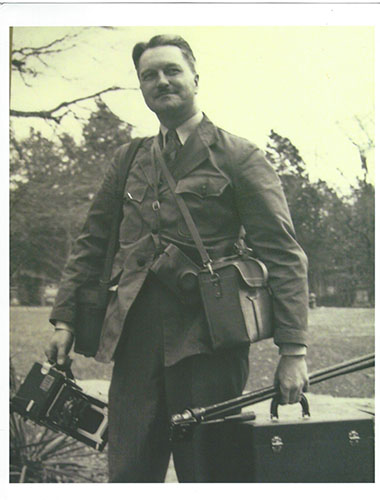 Bowling Green, KY – The estate of W. Ray Scott, international travel writer, and photographer, has donated some twenty-thousand images representing a large portion of his life's work to the Department of Library Special Collections in the Kentucky Building at Western Kentucky University.  “We are extremely pleased to add W. Ray Scott’s negatives and slides to our image collections in the Department of Library Special Collections at WKU,” said DLSC Department Head Jonathan Jeffrey.  “At least one-half of the collection relates to Kentucky parks and monuments, with a significant concentration on Mammoth Cave and other caves in our region.  Scott was a professional photographer, so these images are crisp, rich shots that we and our users will be able to use in a variety of ways in the future.” DLSC Images Librarian Nancy Richey adds: “Scott’s beautiful photographs are found in many publications showcasing the beauty of the National Park system. We are pleased to have this distinctive and valuable collection to add to our holdings.

Neila Darnaby and Daryl Gilpin, Scott's daughters, gifted the collection so that their father's work could benefit future generations in their study of Kentucky and the world.

Ray Scott, a native of Metcalfe County, developed his love of photography while serving in the Civilian Conservation Corp in the 1930's.  He began his CCC work in California and Idaho before ending his work at Mammoth Cave.  Learning photography and documenting the life and history of the CCC camps provide him with his lifelong profession and avocation.

He attended Murray State Teachers College (Murray State University) and Western Kentucky State Teachers College (Western Kentucky University) during the mid-thirties as well as the Ray Vogue School of Photography in Chicago in 1938, completing a two-year program in four and a half months.  Working as a photographer with the U.S. Corp of Engineers in Mississippi and Georgia, he documented the construction of airfields and continued to hone his skills as a photographer.  During his three years with the U.S. Engineers, he met and married his wife of 49 years, Verna Bruister in Meridian, Mississippi.

When World War II started, he joined the Navy and began working with 35mm motion picture film at the Naval Air Station, Norfolk, Virginia.  In a matter of three months, he was placed in charge of a camera crew whose many jobs included submarine patrol once a week.  While serving in the Navy, Scott became the chief photographer in charge of the division.

After being discharged from the Navy in 1946, he returned to Mammoth Cave to work as a photographer, becoming public relations director for National Park Concession, Inc. (NPC), with operations in Isle Royal National Park, Michigan, Olympic National Park, Washington, Big Bend National Park, Texas, and the Blue Ridge National Parkway in Virginia and North Carolina, as well as Mammoth Cave.  Ray spent twenty-one years promoting the parks in the NPC group.

In 1967 he joined Kentucky's travel division as assistant to the director, becoming Director in 1978.  The Kentucky Department of Tourism was formed in 1979, and Scott became executive assistant to the Commissioner of Tourism, a position he held until his retirement in 1981.  After retiring, he freelanced, working with some six travel magazines and two book publishers.  This allowed him to travel the world writing and taking photographs. Scott died in August of 1987 and is buried in Cave City, Kentucky Cemetery.

Photo: W. Ray Scott is shown in his earlier days.