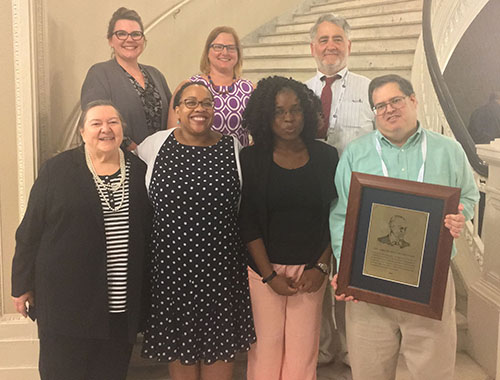 WKU Library Public Services Professor Rosemary Meszaros received the ProQuest/GODORT/ALA “Documents of the People” Award on Sunday, June 24, 2018 at an awards ceremony for The Government Documents Round Table (GODORT) in New Orleans, Louisiana during the American Library Association’s (ALA’s) annual summer conference. This award honors an individual, library, institution, or other non-commercial group that has most effectively encouraged the use of government documents in support of library service.

As Coordinator of Government Information Services and Law/Federal Depository Librarian for the Second Congressional District at Western Kentucky University, Meszaros has contributed significantly to the university and community-at-large. Ms. Meszaros has authored many articles on government information throughout her career and is a member of ALA GODORT and the Kentucky Library Association’s GODORT. She has been a contributor to Magazine for Libraries since 2003, where she selects and describes government information resources, both print and online, in the Federal Government Documents chapter, as well as the State, Local and State Municipal Associations Government Documents chapter.  On a national level, she has served on the Journal of Academic Librarianship Editorial Board since 2001. On a local level, she has taught thousands of students the use of federal and state documents in numerous classes at Western Kentucky University, and was named Kentucky Academic Librarian of the Year in 2006.

Meszaros will be retiring from WKU at the end of June with twenty years of service. For more information on Government Documents Round Table, go to ala.org/rt/godort/

Picture Note: Meszaros is pictured on the bottom lefthand side with the other award recipients at the reception in New Orleans on June 24.