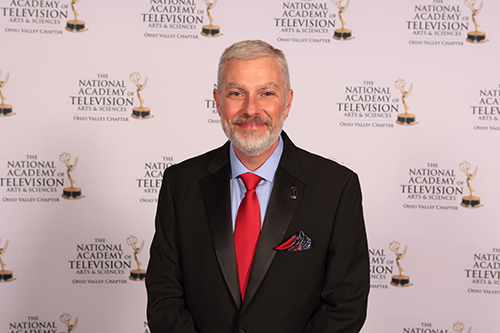 David Brinkley, WKU Director of Public Broadcasting, has been named a Silver Circle Honoree for distinguished service by the National Academy of Television Arts and Sciences’ Ohio Valley Chapter. The award will be presented Aug. 18.

WKU PBS, WKU’s Public Television Service, has been nominated for three awards in three categories for the 54th Annual Ohio Valley Emmy Awards. Recipients will be announced Aug. 18 during a ceremony in Lawrenceburg, Indiana.

WKU’s Public Television Service has been nominated in each of the past 15 years, receiving 23 awards and this year will have had three Silver Circle honorees with the induction of David Brinkley, Director of Public Broadcasting. In the 54-year history of the chapter there have only been 14 Silver Circle inductees from Kentucky; three of them are employed at WKU PBS (Barbara Deeb, 2016 inductee; Cheryl Beckley, 2017 inductee; and Brinkley, 2018 inductee).

Darius Barati (’07), Neil Purcell (’15) and Kelli Brock (’17), all WKU graduates, and Jeff Petrocelli were nominated this year for Lost River Sessions. This is the fourth consecutive year for work on Lost River Sessions to be recognized in multiple categories.

“I’m excited and thrilled by the nominations and for our Lost River Sessions team,” said Petrocelli, now a three-time nominee. “It is an honor to be part of something so special.”

Brock, a first-time nominee, said: “My first day as a student at WKU, I walked into WKU PBS with hopes that I would be able to spend my time learning more about the industry. With that said, I didn’t realize this station would become a second home to me. I spent countless hours of my college career doing what I love with some of the most talented, driven, and funniest people I know.”

“I’m so proud of Kelli and what she was able to accomplish here at WKU PBS.  To be a full time student while also producing network quality content, I don’t know that people understand the effort, passion and talent that it takes to accomplish that,” said Barati, producer of Lost River Sessions. “We’re incredibly honored to represent this community and region through Lost River Sessions. David Brinkley has given us the opportunity to thrive on so many levels, and the success of LRS to date is a direct result of his leadership and guidance.”

Purcell, a past Emmy recipient, added: “It feels amazing to receive a nomination for work on Lost River Sessions again this year. Darius always has a vision for each episode and I always walk away from the filming with the feeling that the latest episode will be the best. It’s been surreal to have a community that gives us the chance to continue to raise the bar each year. Having a group of peers recognize that we are creating a great program is a byproduct of the support we receive from WKU and our donors.”

These performances showcased local attractions and businesses in southcentral Kentucky. These episodes featured the Artist Pad and Loft B&B in Glasgow; Downing Museum at the Baker Arboretum in Bowling Green; and Shaker Village at South Union.

David Brinkley, WKU Director of Public Broadcasting, has been named a Silver Circle Honoree for distinguished service by the National Academy of Television Arts and Sciences’ Ohio Valley Chapter.

The National Academy of Television Arts and Sciences’ Silver Circle is one of the highest honors given by NATAS to recognize television professionals who have performed distinguished service within the television industry for 25 years or more, a significant part of which was done within the chapter’s region of Ohio, Kentucky, Indiana and West Virginia. In addition to their longevity, inductees are honored for making an enduring contribution to the vitality of the television industry and for setting standards of achievement as mentors, educators and volunteers.

There have been 65 Silver or Gold Circle recipients in the 54-year history of the Ohio Valley Chapter.  Brinkley is the third recipient from Bowling Green and will be only the 14th recipient from Kentucky.

“There is no more humbling experience than to be recognized for a body of work,” he said. “It has been my honor to work in this industry and serve the fine people of the Commonwealth through the content that is created by our team. I am proud to have served the majority of my career here at WKU and been able to, in some small way, pass along skills to the next generation of storytellers.”

“This is a wonderful tribute to David’s service and leadership in Public Broadcasting,” said Robbin Morrison Taylor, Vice President of Public Affairs at WKU, “and we’re grateful that Ohio Valley NATAS has chosen to honor him with this distinguished award. David is a consummate professional. He is passionate about the work we do in Public Broadcasting and the audience we serve, and he is especially committed to teaching and providing opportunities to our students at WKU. He is very deserving of this recognition, and we’re honored to now have three Silver Circle honorees at WKU Public Broadcasting.”

Brinkley began his broadcasting career in the 1990s in commercial radio sales before joining the staff of Kentucky Educational Television. He has been involved at WKU since 1998 after five years of service with KET.  Brinkley has a lengthy television production background with 12 regional Emmy Awards to his credit. He serves in leadership positions with the Kentucky Broadcasters Association, the Ohio Valley NATAS Chapter, NETA Affinity Group Coalition, and is active in PBS, NPR and CPB groups.

“David is most worthy of this honor,” said Dr. Phil Hoffman, Executive Director of WUCF- TV & FM in Orlando, Florida. “His creative skills, his dedication to his larger group of TV colleagues, and his exceptional leadership skills continue to serve the public interest.”

Brinkley is one of two Silver Circle honorees this year.  The other is John Boel, WAVE-3 News Anchor from Louisville. They will be recognized during the 54th annual NATAS Ohio Valley Chapter Emmy Awards on Aug. 18 in Lawrenceburg, Indiana.