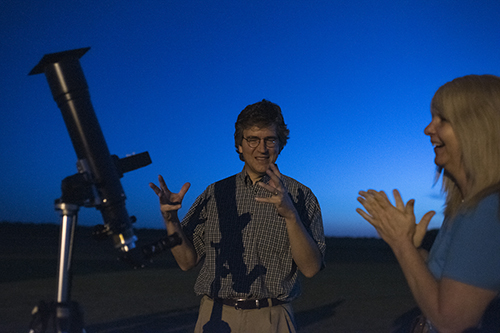 Created in partnership between the National Stem Cell Foundation and The Gatton Academy of Mathematics and Science at WKU, the National STEM Scholar Program selects 10 teachers annually from a national pool of applicants to participate in a week of advanced science training and network building on the campus of WKU.  In addition to training, STEM Scholars receive financial support to develop individual Challenge Projects for classroom implementation and spend a day with a nationally or internationally known STEM (Science, Technology, Engineering and Math) speaker. The 2018 STEM Scholar Speaker is Dr. Eric Mazur, Balkanski Professor of Physics and Applied Physics at Harvard University and the first recipient of the Minerva Prize for Advancements in Higher Education. By “training the trainers,” the National STEM Scholar Program hopes to inspire the next generation of STEM pioneers.

According to Dr. Paula Grisanti, National Stem Cell Foundation Chairman and CEO, “Through our work with researchers and scientists nationwide, we became aware of the widening gap between 21st Century jobs and the U.S. STEM-educated graduates who can fill them. We added education to our mission in 2015 as a way to support the development of a new generation of scientists working to advance technology, build infrastructure and find cures for diseases and conditions that affect us all. Research shows that students who become excited about science in middle school are the ones who will pursue STEM courses in high school and beyond. By investing in the influential middle school science teacher now, we can directly impact thousands of students in classrooms today and far into the future.”

Dr. Julia Link Roberts, Executive Director of The Gatton Academy, added, “This partnership will accrue benefits for the National STEM Scholars, middle school students in their classrooms and the middle school science teachers with whom they collaborate. The National STEM Scholars Program is an excellent way for teachers to learn new strategies and new ways to engage students to help them become and stay interested in science and math.”

To date, National STEM Scholars represent 30 schools in 20 states, from Alaska to Florida and New Mexico to Maine. More than 90 percent teach in public schools and 36 percent teach in towns with a population under 10,000. A significant requirement of scholarship is the responsibility for sharing lessons learned with colleagues in the Scholar’s home schools, districts or states – magnifying the impact of scholarship over multiple classrooms and years.

About The Gatton Academy: Established in 2007, The Gatton Academy of Mathematics and Science is Kentucky’s first state-supported, residential program for high school students with interests in advanced math and science careers. One of only 15 such programs in the nation, The Academy has been named to The Washington Post’s list of top-performing schools with elite students for eight consecutive years. For information, visit www.wku.edu/academy.