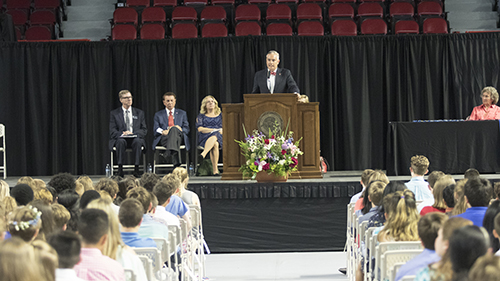 WKU President Timothy C. Caboni was the keynote speaker for the Duke TIP Kentucky recognition ceremony on May 23 at Diddle Arena.

Academically talented seventh-graders from throughout Kentucky were honored by the Duke Talent Identification Program (Duke TIP) May 23 at WKU.

Duke TIP’s 7th Grade Talent Search identifies students across a 16-state region who have scored at or above the 95th percentile on a grade-level achievement test as a sixth-grader. As part of the program, these academically talented students take above-level college-entrance exams to learn more about their abilities. Duke TIP then holds recognition ceremonies to honor the seventh-graders who scored the highest on these ACT or SAT exams. The Kentucky recognition ceremony has been hosted by The Center for Gifted Studies at WKU since 1982.

Nearly 61,000 students took above-grade-level college entrance exams through Duke TIP in late 2017 and early 2018. In Kentucky, 883 qualified for the state recognition ceremony. Nearly 275 of those students attended the ceremony at WKU.

“What we know is that you in this audience will grow up to become our senators, our presidents, our university presidents, our chief executive officers, and much more,” he said.

Courtright also encouraged the seventh-graders to aim high in their future academic endeavors. “We hope this honor will encourage you to advance even farther as you look to the future,” he said.