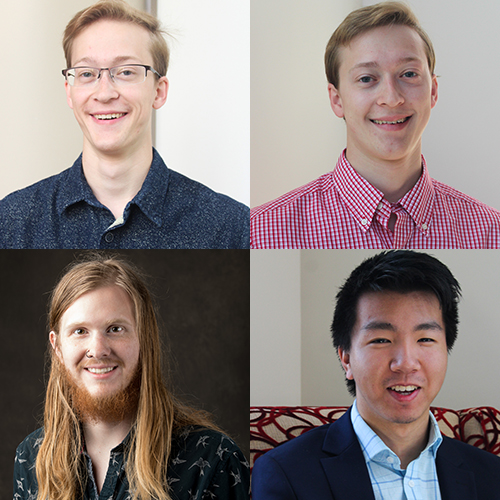 The Intensive Chinese Language Program (ICLP) at National Taiwan University in Taipei, Taiwan provides an immersive environment in which students study Mandarin Chinese for nine weeks. Students at ICLP commit to speaking only Chinese for the duration of the program and receive individualized tutoring.

The Freeman-ASIA program is designed to support undergraduates studying abroad in east or southeast Asia and promote understanding of Asia and its peoples and cultures.  Award recipients will share their study abroad experiences with others at WKU or in their home communities.

Andrew Lambdin, a second-year computer science major, is the son of Suzanne and Thad Lambdin.  He plans to combine his studies at WKU by working for American companies with ties to China.

“After learning Mandarin Chinese for two years, it is exciting to have the opportunity to put those skills to the test in an immersive environment,” Andrew Lambdin, said. “Not only will traveling to Taiwan improve my language skills, it will also give me the opportunity to explore and better understand the many cultural differences that simply are not present in the United States.”

Nathaniel Lambdin, a second-year international business major, is the son of Suzanne and Thad Lambdin.  He will also study at ICLP this summer.  He plans to manage American supply chains with ties to China and Taiwan.

“I think, as trading partners, studying abroad in Asia is beneficial to better understand the region from which we buy most products,” Nathaniel Lambdin said.  “As citizens, it is beneficial because it helps us learn more about world we live in and it helps us appreciate from where we come as Americans.”

Tang, a second-year architectural science and Asian religions and cultures major, is the son of Yue Rong Li and Zhen Tang.  He will also study at ICLP this summer.  Tang hopes to combine his studies at WKU by working as an architect in China and designing safe, affordable housing.

“The importance of critical language study is meaningful in the sense that it opens up not only doors, but windows of opportunities,” Tang said.

Myers, a third-year film major, is the son Monique and Michael Myers.  He will study abroad through Princeton in Beijing.  He will sign a language pledge, receive individualized instruction and attend special lectures on Chinese studies through the Princeton University-administered program.  He plans to work in the international film industry in cooperation with Chinese production companies to make co-produced films.

“Learning another language opens up so many different opportunities that I wouldn't have otherwise, both professional and personal,” Myers said.

Each student worked with Cory Dodds, coordinator of nationally-competitive opportunities in the Office of Scholar Development at WKU, in preparing their Freeman-ASIA applications and with advisors in the Office of Study Abroad and Global Learning in choosing a study abroad program that best fit their academic and career goals.

About the Chinese Flagship Program: WKU’s federally funded Chinese Flagship Pilot Program is actively redefining the paradigm in language education.  The program is designed to bring talented students who start with no knowledge of Chinese up to the Superior level (ACTFL scale) of proficiency by the time they graduate from college by integrating Chinese language instruction at every stage of the undergraduate educational path and incorporating a capstone year at Nanjing University and working in a professional internship.