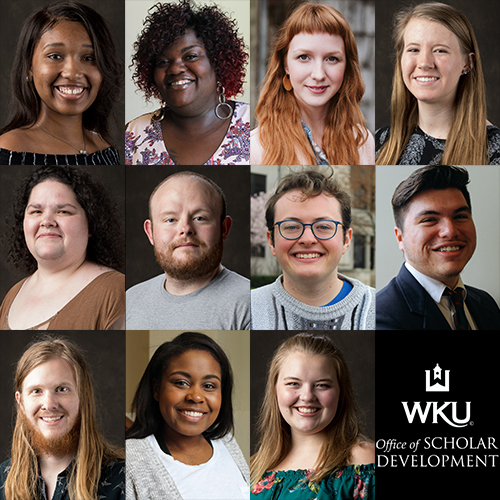 Anna McAvoy of Richmond and Casey McKinney of Burkesville were selected as alternates and may receive the scholarship as additional funding becomes available.

Berry, a junior nursing major, is the daughter of Anna and Rick Berry.  She will study in Tanzania this summer through a Kentucky Institute for International Studies program led by Dr. William Mkanta, interim department head of the WKU Department of Public Health.

Butler, a senior sociology major, will study in Ghana this summer.  She previously studied abroad in Trinidad during summer 2017.  Her family includes her husband Ronald Butler and her parents Mary and Lewis Green.

Chagnon, a senior art history major, is the daughter of Cheryl and Ron Chagnon. She will study in Spain this summer.  She plans to pursue a career in which she can use art as a means of communication between cultures.

Golden, a freshman English for secondary teachers major, is the daughter of Sarah and Shawn Golden.  She will study abroad in Costa Rica this summer.

Hernandez-Torres, a senior management major, is the daughter of the late Patricia Piccione and Miguel Hernandez-Torres.  She will study Spanish in Mexico this summer.  Hernadez-Torres plans to begin a second bachelor’s degree to become a teacher of English to speakers of other languages.

King, a junior political science and international affairs major, is the son of Sharon and Scott King.  He will study abroad in Morocco this summer on a program led by Dr. Soleiman Kiasatpour, associate professor in the WKU Department of Political Science.  King plans to pursue a career in the U.S. Department of State or with an international non-governmental organization.

McFarland, a senior Chinese and English major, is the son of Kimberly Atwood McFarland and Mark McFarland.  He will study and intern in China this summer.

McManis, a junior international affairs major, is the son of Serafin Rivas and Heather McManis. He will study in Morocco this summer on a program led by Dr. Soleiman Kiasatpour, associate professor in the WKU Department of Political Science.

Myers, a third-year film major and Chinese Flagship student, is the son Monique and Michael Myers.  He will study Mandarin Chinese intensively through Princeton in Beijing. He plans to work in the international film industry in cooperation with Chinese production companies to make co-produced films.

Neblett, a senior nursing major, is the daughter of Erica Neblett.  She will study in Tanzania this summer.  Her program is administered by the Kentucky Institute for International Studies and led by Dr. William Mkanta, interim head of the WKU Department of Public Health.

Rogers, a freshman international affairs major and Chinese Flagship participant, is the daughter of Tiffany Rogers and Kenneth Wilkerson.  She will study Mandarin Chinese in Shanghai, China intensively this summer.  She plans to utilize her Chinese language skills and studies at WKU as a U.S. foreign service officer.

McAvoy, a sophomore international business major, is the daughter of Cindy and Bill McAvoy.  She will study in Dublin, Ireland this summer.  McAvoy plans to pursue law school after WKU.

McKinney, a junior business economics major, is the son of Sandy and Roger McKinney.  He will study abroad in Argentina this summer.  McKinney plans to utilize his degree with a local company.

“WKU students continue to compete and succeed in the Gilman Scholarship competition,” Cory Dodds, coordinator of nationally competitive opportunities in the Office of Scholar Development at WKU, said. “Their success is a credit to the university’s and faculty’s commitment to international experiences for WKU students regardless of financial need or background.”

Funded by the U.S. Department of State, more than 3,400 Gilman scholarships will be awarded this academic year for undergraduate Pell Grant recipients to study or intern abroad.  Since 2001, the Gilman Scholarship has enabled more than 25,000 outstanding Americans of diverse backgrounds, including ethnic minorities, students studying science, technology, engineering and mathematic, and students with disabilities, to engage in a meaningful educational experience abroad. The program has successfully broadened U.S. participation in study abroad, while emphasizing countries and regions where fewer Americans traditionally study.

Each of the students worked with Dodds in the Office of Scholar Development at WKU in preparing their Gilman Scholarship application and with the Office of Study Abroad and Global Learning to find the best academic program abroad to fit their goals.