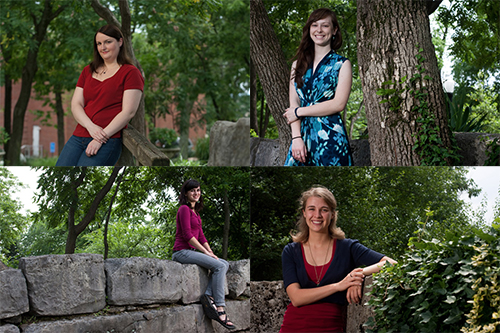 In 2009, WKU was named one of the top U.S. producers of Fulbright students, among Master’s degree-granting institutions.  This year, four WKU graduates–Jennifer Dooper, Dawn Reinhardt, Eileen Ryan and Emily Wilcox–have been awarded 2010-2011 Fulbright grants. All four are graduates of the University Honors College, and of departments within WKU’s Potter College of Arts & Letters.

Dooper, Ryan and Wilcox will be teaching English in Argentina, South Korea and Indonesia, respectively, while Reinhardt will travel to Germany on a research grant in German literature and language, the U.S. Department of State and the J. William Fulbright Foreign Scholarship Board announced recently.

Jennifer Dooper, the daughter of Wanda and Siebrand Dooper of Owensboro, double majored in English and Spanish. According to Jeanne Sokolowski, Fulbright application coordinator for WKU’s Office of Scholar Development, “English Teaching Assistants (ETAs) in Argentina instruct at Teacher Training Institutes, and the Fulbright Commission in Argentina looks specifically for applicants with Spanish language proficiency who have teaching experience and a demonstrated interest in a career in education.”

This profile aptly describes Dooper, who is exploring several options for a career in education, either at the secondary or post-secondary level. Dooper spent one semester as a teaching assistant for Professor Ted Hovet of the English Department. Of Dooper’s teaching, Hovet said, “I was especially impressed at her ability to provide students with a mixture of positive feedback and specific direction for improvement: a valuable (and rare) combination at any stage of teaching experience.”

Dooper will be in Argentina from March through December of 2011. “I’m very excited about testing out my teaching skills and fully immersing myself in the rich Argentine culture,” Dooper said. “What with tango, beef, and their beautiful dialect, the Argentines have a lot to share with me!”

A double major in German and English, Dawn Reinhardt will spend a year in Munich, researching sixteenth century German Teufelsbucher, or “Devil Books,” and taking classes at the second largest university in Germany, Ludwig-Maximilians Universitat Munchen (Ludwig Maximilian University of Munich). Her project will focus on exploring correlations between the Protestant Reformation and the beginning of the Teufelsbucher genre.

“The Fulbright is offering me an opportunity that I never thought possible,” Reinhardt said. “Thanks to them, I get to spend a year in Germany studying a subject I love.  What could be better?”

Reinhardt, daughter of Robert and Barbara Reinhardt, hails from Crossville, Tenn. Her application was supported by Dr. Laura McGee, Professor of German and interim head of the Modern Languages Department, who applauded Reinhardt’s savvy in laying the groundwork for a successful Fulbright application.

“Dawn was smart about her studies at WKU,” Dr. McGee said. “She established a solid foundation in literary studies, added a foreign language to help expand her research capabilities, and gained international experience through a semester abroad in Regensburg, Germany, with the Kentucky Institute for International Studies. She also took the time to talk to her professors outside of class, receiving mentoring and establishing the basis for some solid letters of recommendation.”

Mike and Ruth Ryan of Louisville will be sending their daughter Eileen Ryan across the globe to South Korea to teach English. Ryan completed a double major in Journalism and English.

Ryan and Dooper were roommates while at WKU, and applied for Fulbright grants at the same time, though the announcement of ETAs to Argentina was made earlier than for the awards to South Korea.

“Jennifer called me two minutes before my class and told me there was an official-looking brown envelope in our mailbox,” Ryan said. “I had to sit through a whole class before I could go look, and when I finally opened the letter in my room, I screamed so loud people in the building probably thought I was being murdered!”

Ryan chose to apply to South Korea in part because of that country’s innovative tradition of “citizen’s journalism.” While in Korea, she hopes to contribute pieces to English language newspapers or blogs in her free time, as well as study the Korean language. Undergraduate Honors Advisor and Assistant Professor of English Walker Rutledge noted that, “A talented and vivacious researcher, writer, and speaker, Ms. Ryan may soon become the most sought-after teacher in South Korea. What good fortune awaits her students!”

Emily Wilcox, of Louisville received a bachelor’s degree in Art from WKU in 2009; her parents are John and Micki Wilcox. Already a seasoned traveler, having spent four months in both India and South Africa during her undergraduate career, Wilcox welcomed the challenge of applying to teach English in Indonesia, where she is excited to incorporate art into the English language classroom.

“Art is an aspect of culture that communicates about values and worldviews in a way that’s both poetic and accessible,” Wilcox said. “It’s a tool for understanding humanity, which is such an important focus when it comes to globalization in our world.”

Art Professor Kristina Arnold was particularly impressed with Wilcox’s ability to tackle non-traditional projects, as she did in South Africa. “On her own, Emily researched opportunities, made contact with a non-profit organization with no formal ties to American universities, convinced them to take her on as an intern and convinced us that it was safe and a legitimate opportunity,” Professor Arnold said. “In South Africa, she completed a semester-long internship in which she tied her education in art seamlessly into direct community service.”

The ETAs in Indonesia are often placed in rural areas, outside major cities, and so Fulbright looks for applicants they believe to be resourceful and flexible. Another of Wilcox’s art professors, Dr. Guy Jordan, has no doubts she’ll thrive in Indonesia.

“She’s already traveled and studied abroad for significant periods of time,” he said, “and she has the ability to adapt to a wide variety of situations and improvise solutions on the fly. As gifted as Emily is in class, her commitment to relentlessly apply her knowledge and talent to serve the community is what really sets her apart.”

These four students are among the more than 1,500 U.S. citizens who will travel abroad for the 2010-2011 academic year through the Fulbright U.S. Student Program.

For the 2010-2011 cycle, a total of six WKU students applied for Fulbright grants; all four whose applications advanced to the second round were offered grants. Students applying for the Fulbright and other nationally prestigious scholarships work closely with faculty and staff at the Office of Scholar Development, as well as with faculty mentors, such as Potter College professors Arnold, Hovet, Jordan, McGee and Rutledge.

As Dr. McGee said: “We have a lot of talent on this campus. I’d like to see more students pursue prestigious fellowships for study and research abroad in the future.”

Dr. David Lee, Dean of Potter College of Arts and Science, is delighted by the successes of Potter College students in this year’s competition. Dean Lee also underscored the synergy between faculty and students, saying, “I’m particularly proud of the wonderful partnership that links talented students with committed faculty and staff to make outstanding achievements like this possible.”

Two WKU students are currently abroad as Fulbright English Teaching Assistants. Rick Deem, a 2009 graduate who majored in German and minored in French, is teaching in Giessen, Germany. Katherine Hale, a 2007 graduate, has been working as an ETA at the Universidad Nacional de Villa María (National University of Villa María) in Villa María, Córdoba, Argentina, since March of this year. She calls the experience “both educationally and personally rewarding” adding, “Opportunities for cultural exchange arise every day, from drinking mate [a popular herbal drink] with friends to seeing an Argentine folk music show, or even something simple like chatting with the lady at the deli shop next door. I am loving my life in Argentina!”

About the Fulbright Program:

The Fulbright Program is the flagship international educational exchange program sponsored by the U.S. government and is designed to increase mutual understanding between the people of the United States and the people of other countries.  The primary source of funding for the Fulbright Program is an annual appropriation made by the U.S. Congress to the U.S. Department of State, Bureau of Educational and Cultural Affairs.  Participating governments and host institutions, corporations and foundations in foreign countries and in the United States also provide direct and indirect support.  Recipients of Fulbright grants are selected on the basis of academic or professional achievement, as well as demonstrated leadership potential in their fields. The Program operates in more than 155 countries worldwide.

Since its establishment in 1946 under legislation introduced by the late U.S. Sen. J. William Fulbright of Arkansas, the Fulbright Program has given approximately 300,000 students, scholars, teachers, artists and scientists the opportunity to study, teach and conduct research, exchange ideas and contribute to finding solutions to shared international concerns.

Fulbright recipients are among more than 40,000 individuals participating in U.S. Department of State exchange programs each year.  For more than 60 years, the Bureau of Educational and Cultural Affairs has funded and supported programs that seek to promote mutual understanding and respect between the people of the United States and the people of other countries.  The Fulbright U.S. Student Program is administered by the Institute of International Education.

For further information about the Fulbright Program or the U.S. Department of State’s Bureau of Educational and Cultural Affairs, visit http://fulbright.state.gov or contact James A. Lawrence, Office of Academic Exchange Programs, telephone 202-632-3241 or e-mail fulbright@state.gov.