Students win scholarships to study in China for summer program 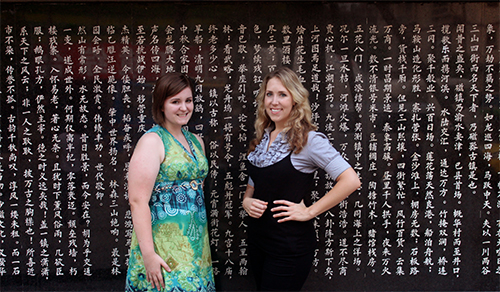 Sara Moody, of Warsaw, Ky., is a social work and international relations double major with double minors in American humanics and Asian studies. She is part of the inaugural class of WKU’s Chinese Flagship Program. This is her second trip to China, where she hopes to work after graduating in May 2012. Dr. Chen said, “I am really happy for Sara to get this scholarship. Her hard work paid off. She definitely deserves it, and I hope this will be an inspiration to her fellow Flagship classmates.”

“Thanks to both the Chinese Flagship Program and the Foundation for Asia Pacific Education,” Moody said, “this summer I was able to continue my intensive study of Chinese at Sichuan International Studies University.  Strengthening my Chinese language levels will help prepare me to continue to work with the Chinese community, either abroad or domestically. “

Alyssa Surina is a senior who is double majoring in economics and math. She is from Nashville, Tenn., and plans to attend graduate school to pursue a doctorate in international economics. She is also the recipient of a summer 2010 Benjamin A. Gilman International Scholarship. Surina has returned to college to pursue a bachelor’s degree more than 10 years after receiving her associate’s degree.

Surina initially thought that a study abroad experience would be financially and logistically impossible, but the intensive summer program offered by WKU’s Chinese Flagship Program, along with the funding opportunities she learned about from the WKU Study Abroad Office and the Office of Scholar Development, have allowed her to incorporate language study and cultural immersion into her schedule.

Surina is eager to explore the material reality of the economic theories she has encountered in the classroom. “On an academic level, I know how globalization drives down the price I pay for cotton T-shirts in Kentucky,” Surina said, “but I also want to see how globalization changes the actual lives of people on the other side of this world market.”

When she returns to Bowling Green in the fall, Surina will continue her Chinese language studies as part of the Flagship Program.

Moody and Surina are spending eight weeks in southwestern China on the Chinese Flagship’s Chinese Summer Intensive Language Practicum. The program is for beginning and intermediate level Chinese language students, and is based at Sichuan International Studies University (SISU) in Chongqing, China. SISU is WKU’s Chinese partner university for its Confucius Institute.

One of the features of the Chinese Summer Language Intensive Practicum is the opportunity to engage with the community. As a group, the students are hosting “English corners” on campus every week, where Chinese students can come and have an opportunity for conversation in English.

Moody describes the English corner as a great chance for genuine interaction with Chinese students. “Whether a couple of WKU students are walking to the library or to the cafeteria, it seems like we constantly are running into students we met at the English Corner,” Moody said. “As an international student abroad, it is very encouraging to see familiar faces in crowds of unknown students.”

About the Chinese Flagship Program: WKU’s federally funded Chinese Flagship program is designed to bring talented students who start with no knowledge of Chinese up to Superior levels of proficiency by the time they graduate from college. WKU is one of nine universities funded for Chinese by The Language Flagship through the National Security Education Program.