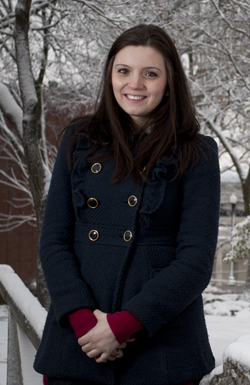 WKU graduate Dunja Zdero of Louisville is working in Brazil on a 2011-2012 Fulbright grant.

Zdero is a graduate of the Honors College at WKU with degrees in news/editorial journalism and Spanish.  She began her placement as an English teaching assistant (ETA) in Brazil at the end of February.

During her time in Brazil, Zdero will be working with several professors while teaching English courses that focus on joining various language skills that students have already learned in their other courses. In addition, ETAs are required to do a self-designed project during their time abroad.

“I plan on starting a journalism blog in English about the people and the culture of Brazil,” Zdero said. “I will mostly focus on writing human interest stories that feature specific people or certain parts of the culture.”

The Fulbright program was created in 1946 to increase the mutual understanding between the people of the United States and the people of other countries. Since its inception, more than 294,000 individuals have been afforded the opportunity to study, teach, conduct research, exchange ideas and search for solutions to shared international concerns.

Zdero is the latest WKU graduate to be recognized by the J. William Fulbright Foreign Scholarship Board for her exemplary application. In 2009, The Chronicle of Higher Education named WKU as one of the top U.S. producers of Fulbright students among master’s degree-granting institutions. Since 2007, 10 WKU students have won the competition.

Zdero worked closely with the Office of Scholar Development to complete her application.

“The most difficult parts of the application were the two essays: the Personal Statement, and the Statement of Purpose,” Zdero said. “The Office of Scholar Development has been an enormous help. They’re very informed about the program and once I got started, they edited, and edited, and edited my essays until they felt like my essays represented me as a good applicant.”

Amy Eckhardt, director of the Office of Scholar Development, was encouraged when hearing about Zdero’s acceptance into the program.

“The Fulbright has grown increasingly competitive in the past five years.  Yet, the number of WKU students winning these prestigious awards has risen,” she said. “Our students, their faculty mentors and the dedicated staff of the Office of Scholar Development should be commended.  We encourage other students to explore the possibilities of integrating a Fulbright experience into their career plan.”

Zdero hoped to have a gap year before going to graduate school and viewed the Fulbright program as a perfect opportunity. She was elated upon hearing the news of her acceptance.

“The first person I called was my best friend Jennifer Dooper, who will be a Fulbright ETA in Argentina the same time I will be in Brazil,” Zdero said. “Jennifer and I had toyed around with the idea of teaching in South America together, but I never thought it would be possible.”

Mac McKerral, associate professor of journalism and coordinator of the news-editorial program, said that Zdero is one of the most impressive students that he has witnessed since arriving at WKU.

“I think Dunja exemplifies the best in the School of Journalism and Broadcasting,” McKerral said. “In my time here, I think she is the best reporter and writer that I have taught. More important, her work ethic and her willingness to do everything possible to improve herself shows a high level of maturity and professionalism. Throughout her time at WKU, she has carried a full-time course load in the Honors College and worked a job. But she never missed a deadline or failed to meet an obligation. I also admire her love of languages, all languages. Whatever career path she chooses to pursue, she will succeed.”

“I joined the Honors College my freshman year, and I can honestly say that it has been one of the best decisions that I have ever made,” Zdero said. “The fact that I was able to complete an undergraduate thesis will definitely help me in graduate school and my later career as a literature professor.”

Zdero looks forward to the opportunities that await her in Brazil and encourages all interested students to apply for some form of nationally competitive scholarship.

About the Honors College at WKU: WKU is home to the only Honors College in the Commonwealth of Kentucky. Created in 2007, the Honors College at WKU provides an intimate, highly selective learning environment where college-age gifted and high-achieving students can develop the skills to prepare them for success in the nation’s top academic and career opportunities. For information, contact Drew Mitchell, (270) 745-2081.