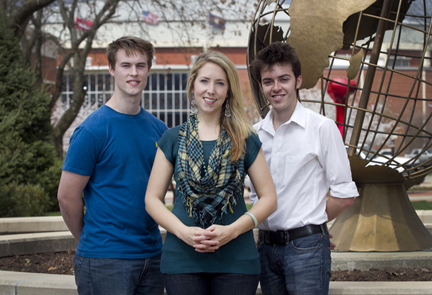 Three WKU students have been awarded prestigious Critical Language Scholarships from the U.S. Department of State.

Allie Surina, Will Meredith and J.P. Stovall, all students in the WKU Honors College and the Chinese Flagship Program, will travel to China for 7-10 weeks of embedded, intensive language instruction and cultural enhancement. The award covers all costs for travel, study and living expenses during the program. Meredith and Stovall will study in Beijing, while Surina will be placed at the Institute of Xi’an.

Amy Eckhardt, director of the Office of Scholar Development, works with applicants for the CLS and other nationally competitive scholarships throughout the year.

“The CLS is an elite scholarship.  The odds are against winning – 50 selected from 800 applicants,” Eckhardt said. “Yet this year alone, Flagship students have won three of the coveted 50 scholarships for China.  I am excited for our students to take part in such a transformative experience.”  With these awards, eight WKU students have received Critical Language Scholarships: four in Chinese and four in Arabic.

Stovall, an Owensboro junior, is triple majoring in Spanish, International Affairs and Asian Religions and Cultures. Stovall said that he joined the Chinese Flagship Program because of his love of languages.

After achieving fluency in Spanish before coming to college, he decided that wanted to study a third language.

“I wanted to learn a language that is relevant to our time – hence Chinese,” he said. “I’m currently in my second semester with the program and I am freshly stateside after my first trip to China this winter.”

Stovall said that he applied for the Critical Language Scholarship because of the vast benefits that the program offered.

“It’s a perfect match,” he said. “I want to learn Chinese as quickly and thoroughly as possible. The best way to do so is through immersion study. I was absolutely ecstatic when I heard that I actually received the scholarship.”

Dr. Roger Murphy, associate professor of Political Science, said that since meeting Stovall, he has witnessed his great achievements in the classroom.

“J.P. is a student of tremendous potential,” he said. “His receipt of a Critical Language Scholarship will provide a significant boost for his plans to work in the Foreign Service.”

After graduation, Stovall said that he hopes to work for the U.S. State Department and hopes that the CLS will be an effective way to get his foot in the door. The State Department, among other U.S. government agencies, actively recruits graduates from The Language Flagship programs because of their professional proficiency in a critical language and their mastery of a professional discipline.

Meredith, of Bowling Green, is pursuing a bachelor of fine arts in Musical Theatre. Also having studied Spanish in high school, Meredith decided to try his hand at another language and joined the Chinese Flagship Program. During his studies, Meredith has traveled to China three times in the last year.

Meredith’s most recent trip to China included employment at a Chinese musical theatre house where he experienced how the art was growing in the nation. In the future, Meredith would like to fuse his theatrical and Chinese backgrounds for various projects.

“I’m looking forward, once again, to being able to spend time in China where I can immerse myself into the culture, language and day-to-day lifestyle,” Meredith said. “Challenges like the opportunity that the Critical Language Scholarship offers allow me to grow as a student and as a person.”

Meredith said that he was shocked upon receiving the award.

“Opportunities like this do not manifest themselves very often,” he said. “I feel honored that the State Department has put enough faith in me as a student to participate in the program.”

Dr. David Young, head of the Department of Theatre and Dance, had no doubt that Meredith would be a successful candidate for the Critical Language Scholarship.

“Will is one of our brightest, most active, and most talented students here in the Department of Theatre and Dance,” Dr. Young said. “He is a pleasure to have in class.  He is always prepared, always positive and always eager to do more than required.  Will takes a very proactive approach to his education and throws himself into every educational opportunity.  I frankly don’t know how Will manages to accomplish all he does.  His energy and resourcefulness are remarkable.”

Surina, of Brentwood, Tenn., is a senior pursuing degrees in Economics and Mathematics. Surina hoped to separate herself from other aspiring economists by having a Chinese language background. She knew that the Chinese Flagship Program offered many opportunities for intensive language study in China, and she immediately wanted to be a part of the program.

“The CLS programs are notoriously hard, frustrating, but ultimately successful,” Surina said. “The Flagship staff has been so amazing at getting me into one amazing opportunity after another.”

“I was so thrilled to know that the next step in my language preparation is actually in place,” she said.

Dr. Michelle Trawick, head of the Department of Economics, has worked closely with Surina.

“Allie is an exceptionally talented young woman with a high level of economic intuition and understanding.  Her primary interest in the Chinese economy makes her a particularly good candidate for opportunities like the Critical Language Scholarship Program,” she said. “Allie’s immersion experience in China will allow her unique insights into the Chinese culture and institutions that shape one of the fastest growing economies in the world.”

Surina said that she chose the Honors College at WKU because of her desire to be involved with people who challenge and prepare her for graduate-level study.

“I am always much more motivated when I am surrounded by other students who are ambitious and who work hard to reach extraordinary goals, and the Honors College is full of such students,” she said. “The relationships with the Honors College and Flagship staff have been the glue holding me into the rigorous classes and extra-curricular activities I’ve taken on.”

About the Chinese Flagship Program: WKU’s federally funded Chinese Flagship Pilot Program is actively redefining the paradigm in language education.  The program is designed to bring talented students who start with no knowledge of Chinese up to the Superior level (ACTFL scale) of proficiency by the time they graduate from college by integrating Chinese language instruction at every stage of the undergraduate educational path and incorporating a capstone year at Nanjing University and working in a professional internship.  For information, call (270) 745-5043 or email Melinda Edgerton at melinda.edgerton@wku.edu

About the Honors College at WKU: WKU is home to the only Honors College in the Commonwealth of Kentucky. Created in 2007, the Honors College at WKU provides an intimate, highly selective learning environment where college-age gifted and high-achieving students can develop the skills to prepare them for success in the nation’s top academic and career opportunities. For information, call (270) 745-2081 or email honors.newsdesk@wku.edu