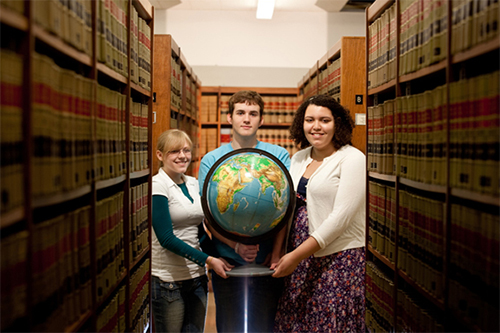 Three students from The Carol Martin Gatton Academy of Mathematics and Science in Kentucky at WKU have been selected for the National Security Language Initiative for Youth (NSLI-Y) scholarship for the summer.

Brandon Kerr of Edmonton and Victoria Allen of Auburn, both studying with the Chinese Flagship program at WKU, one of nine such federally funded programs in the country, were awarded the NSLI-Y scholarship for summer 2011 to study Mandarin for six weeks at Shanghai Normal University.

Charlotte Humes of Bardstown, who is studying Arabic, will be spending her summer in Morocco immersed in Arabic culture.

“Brandon is very serious about Chinese and has impressed me deeply with his talent and motivation,” said Dr. Liping Chen, Assistant Professor of Chinese Language and Linguistics with the Chinese Flagship Program. “He is no doubt a rising star in the program.”

Kerr said that he was concerned that, without practice over the summer, he might lose the progress he has made so far with the language. Hoping to serve as a volunteer doctor after graduation, Kerr saw the potential for personal progress in continuing his studies this summer.

“I was really inspired by the winter program the Flagship took, and I wanted to get back to China as soon as possible. Learning the language will be critical for me if I want to work as a physician in a foreign country one day,” he said.

Allen, a first-year Gatton Academy student, hopes to someday work for an international organization focusing on environmental science. Allen was also offered an opportunity to spend her summer conducting research with the National Science Foundation Research Experience for Undergraduates (REU) program at WKU, studying the impacts of land use and land cover in the Upper Green River Watershed.

“Even though I am incredibly thrilled with this achievement, I have decided to decline the NSLI-Y scholarship. While both are extremely lucrative opportunities, I feel the REU will serve my major and future better,” she said.

Dr. Chris Groves, director of the Hoffman Environmental Research Institute, said Allen’s work this summer “will be largely here at WKU working on some new methods to evaluate environmental impacts on landscapes.  In general this work isn’t specifically China related, but we are going to utilize Victoria’s experience with the Chinese culture to explore how we can transfer this technology to Chinese settings.”

Dr. Groves said that they are also looking into having Allen present her work in Guilin, China, to his Chinese colleagues and work alongside the team for a few days as they work on how to apply the research in China.

“With Victoria’s interest in environmental sustainability issues combined with her Chinese skills working with the Flagship program, I was thrilled that she came to the Hoffman Institute seeking research opportunities this year,” Dr. Groves said. “She has already begun working on an evolving methodology to evaluate environmental impacts at the landscape scale, and with her experience this summer we will evaluate ways to utilize these methods in a Chinese context, where the scales of environmental challenges are enormous.”

Humes said she applied because she loves Arabic and will be spending her summer in Morocco immersed in Arabic culture. Humes is also a first-year student in the Gatton Academy.

The Department of Modern Languages at WKU offers two years of Arabic courses. Courses are taught by Khaldoun Almousily, a native of Jordan, and a new Fulbright Language Teaching Assistant each year, giving students exposure to different dialects and the opportunity to delve deeper into cultural differences.

“Charlotte is an outstanding student who has dedicated herself to her academic pursuits.  She has been one of the highest achieving students and is quick to grasp new material. Her proven abilities demonstrate that she truly is a worthy recipient of this prestigious scholarship,” Almousily said.

Humes, whose studies at the Gatton Academy are focused on chemistry, said that while other opportunities presented themselves that would advance her as a scientist, she felt that her participation in NSLI-Y would make her a better person.

“NSLI-Y is only one part language; it’s also one part culture. I will have the chance to learn about a whole new side of the world, to grow in understanding of their way of life.  The program is very dedicated to broadening the global perspective of students they send,” Humes said.

The opportunity to volunteer in Morocco during the program also interested Humes.

“I believe I am most looking forward to these service opportunities; there have been many chances for community service offered to participants in past years, and the thought of being able to help others while there is immensely exciting,” she said.

About the Chinese Flagship: The WKU Chinese Flagship, one of nine Chinese Flagships in the United States, is sponsored by a federal grant through the National Security Education Program.  The Language Flagship is a national initiative to create global citizens by bringing students to the professional, or superior, level of proficiency in any discipline.  Students in the WKU Chinese Language Flagship program take intensive Chinese language courses each semester throughout their undergraduate career and participate in multiple funded overseas opportunities. Contact: Melinda Edgerton, (270) 745-5043

About the Gatton Academy: The Gatton Academy offers a residential program for bright, highly motivated Kentucky high school students who have demonstrated interest in pursuing careers in science, technology, engineering and mathematics. Sixty students each year are admitted to the program through a competitive process. Instead of spending their junior and senior years in traditional high schools, students enroll in the Gatton Academy and live in a uniquely dedicated residence hall. The goals of the Gatton Academy are to enable Kentucky’s exceptional young scientists and mathematicians to learn in an environment that offers advanced educational opportunities and to prepare them for leadership roles in Kentucky.  At the end of two years, Gatton Academy students will have earned at least 60 college credit hours in addition to completing high school. Contact: Corey Alderdice, (270) 745-6565

Office of Scholar Development: The Office of Scholar Development is committed to helping students on all WKU campuses and in all majors and degree programs develop the vision, experience and skills to be independent, engaged scholars. OSD welcomes the opportunity to work with students interested in applying for international scholarships. Contact: Dr. Audra Jennings, (270) 745-5043.