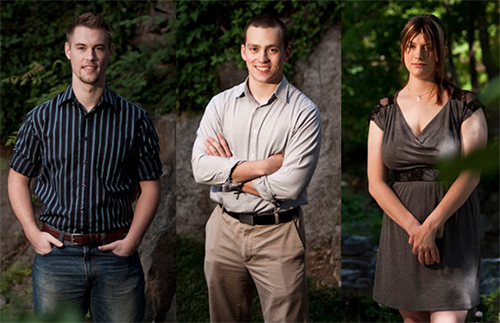 J.P. Stovall of Owensboro and Emmett Stephens of Bowling Green have been selected as winners, and Rebecca Center of Reynoldsburg, Ohio, has been chosen as an alternate for the scholarship. The scholarship includes round-trip airfare, living expenses and tuition for programs throughout the world in which students study critical-need foreign language intensively and experience the culture first-hand.

Dr. Melinda Grimsley-Smith, Coordinator for International Scholarships in the Office of Scholar Development, works with students throughout the application process for the prestigious program to make sure they are representing themselves in the most effective way.

“The CLS awards are very competitive, especially as more universities have begun to offer instruction in Chinese, Arabic and other critical languages. It is incredibly gratifying to work with WKU students and have national committees recognize the same level of drive, ability, and achievement as we see in them,” Grimsley-Smith said.

Stovall is a senior in the Honors College and member of the Chinese Flagship Program. He is a triple major in International Affairs, Spanish and Asian Religions and Cultures. This is Stovall’s second Critical Language Scholarship and he plans to study Chinese.

“I applied again because I wanted more of what I had last summer. The CLS afforded me such great language improvement, incredible cultural experiences, wonderful new friends and an opportunity I will never forget,” he said. “At the end of last year’s CLS I had achieved an advanced level of speaking ability, and now that I have this opportunity once more, I feel that I know what to expect and how to get the most out of the experience and will thus be able to make even more progress than before.”

Stovall said he felt an overwhelming sense of relief and confirmation after receiving the CLS for a second time.

“It’s a great reassuring boost of confidence and validation for the heavy load I’ve been undertaking here at WKU and adds more fuel to my motivation,” he said. “Receiving the CLS is one more piece added to my puzzle of an ideal academic and career track.”

Through involvement in the Honors College and the Flagship program, Stovall said he has been afforded many opportunities and has been able to develop close relationships with many faculty and staff members. He credits his modern languages advisor, Susann Davis, for her support in his decision to pursue a career in the Foreign Service.

“As a freshman, J.P. aspired to be trilingual and, since then, he has challenged himself to make that a reality. As a student in the Chinese Flagship with a triple major and multiple study abroad experiences, J.P. has capitalized on the opportunities WKU has to offer,” Davis said. “He is an excellent student, a gifted and highly motivated language learner, and an outstanding person.”

Although he has been abroad several times, Stovall said he tries to learn something new and have a different experience every time he leaves the United States and apply it to his future.

Stephens is a senior and was awarded a CLS to study Arabic during the summer months. He has declined his award in order to attend the Marine Corps’ Officer Candidate School, but plans to take advantage of future opportunities to strengthen his Arabic skills. A double major in Sociology and Military Leadership who began studying Arabic last year, Stephens believes that is important to develop meaningful relationships with other nations on both the macro and micro levels.

“Each of us has a shared responsibility in the way people in our nation both perceive and are perceived by people outside of the United States,” he said. “By engaging with the citizens of host nations during study abroad programs on an interpersonal level, we develop an understanding of their perspectives while helping to counteract the, oftentimes, negative image of America that exists in the world today.”

Stephens said that deciding to study abroad last year was the best decision of his life because he was able to learn and mature more than from any other event. He studied abroad a second time in the summer and said that he still desires more international experiences.

“I applied for the [CLS] scholarship because I wanted to do it again. I don’t know why anyone wouldn’t,” he said. “An immersive language program is the best way to learn the language. I’d rather practice Arabic with a shop owner on a dusty back-alley street in Nador, Morocco, for example, than in a class with an American kid from Kansas.”

Stephens credits Khaldoun Almousily, his Arabic instructor, with a desire to have meaningful and successful conversations with people in their own language.

“Emmett Stephens is eager to continue to advance his Arabic language skills, as he is very passionate about languages. I think this is a smart move on his part and a judicious one as well,” Almousily said. “He is ambitious and has set out a series of well-crafted career plans which attest both to his motivation and clarity of thought as well as his independence.”

After hearing the news of his award reception, Stephens said he felt thankful for the many opportunities that he has had in his life and as a student at WKU.

“I’m very grateful to be where I am today,” he said. “I just hope that I can afford my future children the same opportunities that I’ve had.”

Center is a sophomore in the Honors College at WKU and a member of the Chinese Flagship program. She was selected as an alternate for the 2012 Critical Language Scholarship competition. Center, a double major in Environmental Health Science and Asian Religions and Cultures, has been studying the Chinese language since she was in high school.

“I have really always liked Asian cultures and I love being able to study it in the classroom,” she said. “It is really great to share experiences with people in the class while integrating our Chinese studies.”

After graduation from WKU, Center has mapped out two possible career paths.

“I will either go to medical school and then go to China to work with people in rural towns or I will go to graduate school and pursue a degree in environmental science to hopefully get a job in the U.S. Embassy working to improve the air and soil quality in China.”

If Center is selected as a CLS recipient, she will travel to China during the summer to participate in the intensive language program. However, she is no stranger to China.

Returning this summer would allow her to employ the language skills that she has been growing since her previous travels. She credits her Chinese instructor Chunling Niu for challenging students in the classroom.

“Rebecca struck me as a very serious language student in general: extremely diligent, competitive, eager to learn and communicate, and genuinely passionate about the Chinese language and culture,” Chunling said. “It is my firm belief that she will definitely make the best use of the scholarship to further her studies in China.”

“I am most looking forward to interacting with the people of China and using my language skills to the fullest. I will try to speak to as many people as I can,” Center said.