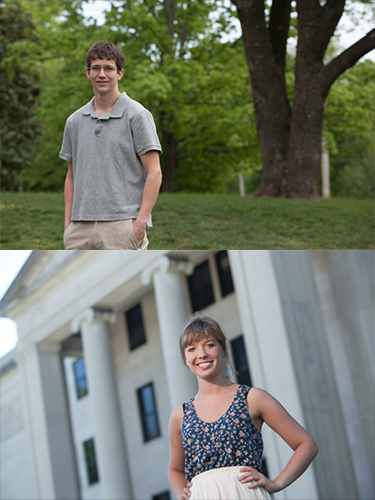 Established by Congress in 1992, the Udall Foundation provides scholarships for students who have demonstrated commitment to a career related to the environment, tribal public policy, or Native health care. This year the Udall Foundation recognized just 130 university students through this scholarship program. Both Clark and Rudolph plan to pursue careers within the environmental field.

Clark, a junior biology major, has always had a passion for the natural world.

“Nature has played a large role in my life through camping in Boy Scouts, bird watching with my mother, fishing with my father and grandfather, and hunting with my uncle and brother,” he said. “My experiences have made me want to conserve the natural world to that others can continue to have these outdoor experiences in the future.”

During his time at WKU, Clark has worked an interpretive park ranger at Mammoth Cave National Park, assisted with several research projects, including bat and ginseng monitoring and worked on a small mammal survey. This summer he will travel to South Africa to conduct a foraging analysis of reintroduced black rhinos.

“I now hope to learn more about the interactions that allow the world to thrive so that our remaining natural areas can be conserved,” he said.

Dr. Mike Stokes, professor of biology, has worked closely with Clark on various research initiatives at the university and serves as his research mentor for the project in South Africa.

“John Clark is a student from a small town in Kentucky who has global potential,” he said.  “John’s undergraduate research project will contribute to our understanding of rhino reintroductions to private lands and, I’m confident, forecasts a significant career in wildlife-related research.”

Clark, the son of Beth and Jim Clark, will be conducting research in South Africa for the rest of the calendar year and will complete his final semester at WKU before attending graduate school.

“I would like to thank my parents, the Honors College, and the Office of Scholar Development,” he said. “I would also like to thank my beautiful fiancée for not killing me when I planned to leave the country for six and a half months.”

Rudolph, a sophomore creative writing and visual arts major, has been involved with environmental activism since she was in the ninth grade.

“I have many passions, but environmentalism has always been central,” she said. “I became aware of mountaintop removal coal mining in middle school, when my youth group partnered with Kentuckians for the Commonwealth (KFTC) to host an ‘I Love Mountains’ concert to raise awareness and to help end the devastating practice.”

Rudolph, the daughter of John Rudolph and the late Sarah Rudolph, has spent much of her time advocating with the KFTC to abolish the practice of mountaintop removal.

While at WKU, Rudolph has worked closely with Christian Ryan-Downing, coordinator of sustainability for the university and advisor of the GreenToppers, an organization in which Rudolph participates.

“Her academic accomplishments speak for her intellectual abilities and creative talents, and make her extraordinary commitments to extracurricular initiatives all the more impressive,” Ryan-Downing said. “As a member of GreenToppers, Students for Campus Sustainability, WKU Americans for an Informed Democracy, and United Students for Fair Trade, Abby has helped WKU achieve Fair Trade University status, has organized ‘real food’ events, has raised awareness about sustainable food issues, and organized students to attend the 2011 Powershift conference.”

“The passionate citizens of KFTC and the First Unitarian Church of Louisville really helped me direct me as an activist,” Rudolph said. “I would also like to thank Wendell Berry for living and writing in such a way as to be a constant reminder of how I want to effect the world.”