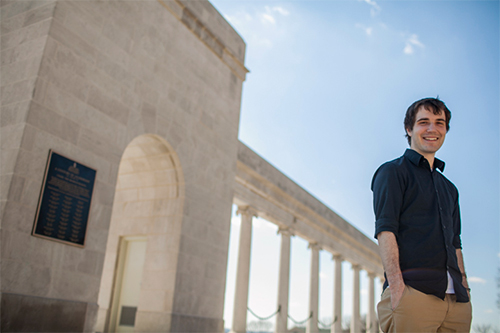 Charles “Chad” Coomer, a WKU student from Louisville, will use two prestigious national scholarships to study and conduct HIV research in the United Kingdom.

Coomer, a biology and chemistry major and student in the Honors College at WKU, has received a U.S. Student Fulbright grant to the UK to complete his master’s degree in infection and immunity at University College London. He has also been accepted into the National Institutes of Health Oxford-Cambridge Scholars Program, which will allow him to pursue a doctorate in virology at the University of Oxford while conducting HIV research at Oxford and the NIH.

Coomer, the son of Don and Evell Coomer, is set to graduate in May. He has been engaged in virology research since his freshman year at WKU, participating in the Howard Hughes Medical Institute-sponsored Genome Discovery and Exploration Program where he isolated and characterized a novel bacterial virus and analyzed the genomes of two novel viruses.

“Upon receiving the Goldwater Scholarship, I was inspired to pursue research that would serve others and began my honors thesis–to develop a sustainable approach to control contaminants in bioethanol systems using viruses rather than antibiotics,” he said.

As he began to explore ways to extend research beyond the lab to improve quality of life, he had the opportunity to work with HIV-infected patients, studying how the virus evolves and adapts to evade the human immune system and conventional therapies at the National Cancer Institute.

“As my passion for research grew, I simultaneously developed a passion for teaching,” Coomer said. This led him to Rocket Power, a program in rural Kentucky designed to expose elementary school students to the sciences.

“As a camp counselor, I introduced the thrill of research to students from a disadvantaged school district,” he said. “These experiences helped me to understand that the purpose of science is not only contributing to discoveries made within the laboratory, but also sharing these discoveries with others in need.”

Through the Fulbright grant, Coomer will pursue research to identify gene sites that inhibit HIV infection in immune cells. He will work within the Medical Research Council Centre for Medical Molecular Virology, hosted by the Division of Infection of Immunity at UCL.

Through the NIH Oxford-Cambridge Scholars Program, Coomer will study at the Dunn School of Pathology, a world leader in research focused on HIV interactions with the human immune system, HIV latent, long-lived reservoirs and their mechanisms of developing persistence.

He said pursuing his doctorate of philosophy at Oxford will provide him “with the necessary tools to achieve my goal of developing curative strategies for HIV infection and will facilitate professional connections that I will draw on in my career as a physician-scientist in support of a world-wide effort to combat HIV infection.”

“Chad is a great example of the growing academic quality at WKU,” President Gary Ransdell said. “He is a world class scholar who has been selected to study at Oxford, one of the world’s greatest universities, in an incredibly important research program supported by our NIH. He is realizing our vision for what out students are capable of achieving.”

In addition to the Goldwater Scholarship, Coomer has completed both an internship and fellowship with the NCI and has traveled to China as a violinist with The Symphony at WKU.

“I think Chad is a refreshing reminder that the Y generation may still be the greatest generation,” she said. “We look forward to having Chad back again to pursue his Ph.D. research at the NIH.”

Dr. Rodney King,  Professor of Biology and Coomer’s mentor, said he was excited to learn that Coomer had received one of the most prestigious merit-based scholarships.

“In 2012, Charles expanded his research expertise by participating in a prestigious summer research internship at the National Cancer Institute where he studied HIV. He made such a good impression that he was invited to continue the research the following summer,” Dr. King said. “Charles has an excellent work ethic and a strong analytical mind. Through his coursework and his undergraduate research training at WKU, he has been diligently preparing himself for a career in virology research.”

Coomer credited WKU’s Office of Scholar Development for preparing him for the intense competition in these two programs.

“OSD has helped me for the past four years by designing a scholarship plan and timeline unique to my interests and career goals,” he said. “For each application I have submitted, OSD has continually provided advice on structuring my application, critiqued my essays and read through multiple drafts, and created mock interviews. Their support in this application cannot be understated.”

OSD Director Dr. Audra Jennings said it has been a pleasure to work with Coomer.

“Committed to a career as an HIV researcher, Chad hopes to make a difference on three levels: contributing to international scientific efforts to develop an HIV vaccine and better treatments for HIV and AIDS patients, providing HIV/AIDS patients compassionate and cutting-edge treatment by practicing translational medicine, using his research to optimize treatment, and making science more accessible to students by serving as a mentor and educator,” Dr. Jennings said. “Chad has an unwavering faith in the power of science to improve the quality of life and transform communities. I have no doubt that Chad will make a tremendous difference in the lives of his future students and patients.”

About the Office of Scholar Development: The Office of Scholar Development is committed to helping students on all WKU campuses and in all majors and degree programs develop the vision, experience and skills to be independent, engaged scholars. OSD welcomes the opportunity to work with students interested in the Fulbright or NIH Oxford-Cambridge Scholars programs or other similar opportunities. Contact: (270) 745-5043.