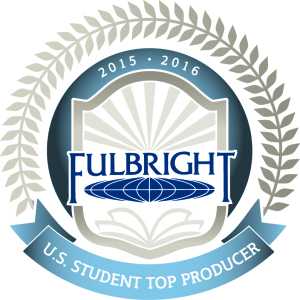 For the third time and the second consecutive year, WKU has been named a top Fulbright-producing institution.

With five student grantees for 2015-16, WKU tied at fifth in the nation among master’s degree-granting institutions. The lists were reported Monday (Feb. 22) in the Chronicle of Higher Education.

“Once again WKU leads the way in the academic achievements of our students,” WKU President Gary Ransdell said. “A Fulbright success rate of 20 percent (25 applicants, five awards) is a great testament to the ability of WKU students and the mentoring of WKU faculty. Given the international dimension of the Fulbright awards, it is also a strong indication of WKU’s international reach.”

Melinda Grimsley-Smith, WKU’s Fulbright Program Advisor, said: “The Fulbright U.S. Student program gives graduating seniors and recent graduates the opportunity to do something amazing—almost anything, almost anywhere, for a year. If they can dream up a way to contribute to mutual understanding between Americans and people in other countries, Fulbright can fund it. Working with our applicants is rewarding in every way imaginable.”

The Fulbright Program, the U.S. government’s flagship international exchange program, is sponsored by the Bureau of Educational and Cultural Affairs of the United States Department of State. The largest international exchange program in the United States, the Fulbright U.S. Student Program awarded about 1,800 grants annually to fund an academic year of study, research, or English teaching in one of about 140 countries worldwide last year. In each of the past two years, more than 10,000 graduating seniors and recent graduates applied nationwide. Grantees are selected on the basis of academic merit, leadership potential, and demonstrated ability to serve as cultural ambassadors for the United States while abroad.