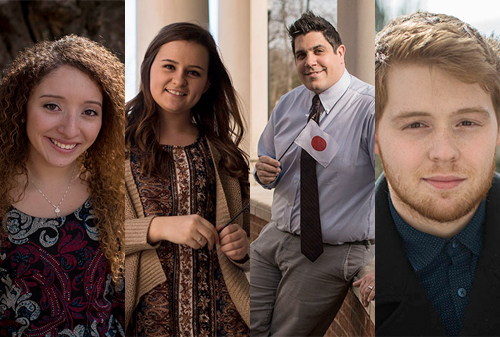 Escobar, a third-year Spanish major, is the daughter of Sandra and Edzon Escobar. She will spend the month of June in Granada, Spain, through the SOL Education Abroad Program. After spending some time teaching high school, Escobar plans to earn a master’s degree in school counseling.

Gordon, a second-year nursing major, is the daughter of Rebecca Jamison. She will study nursing in Tanzania for five weeks this summer and said working with the Office of Scholar Development helped her fulfill her dream of going to Africa.

Rosado, a third-year entrepreneurship major, is the son of Linda Rose. He plans to apply his experience in Japan to future business ventures. The husband and father of three said it is important to have international experience in order to be competitive in the global economy.

Smith, a fifth-year business economics major, is the son of Marilyn Martin. He will study in Jordan and is particularly interested to see how Middle Eastern cultures are influenced by America. He plans to use the experience to operate his own business and use the profits to create opportunities for international education exchange.

Cheryl Kirby-Stokes, Coordinator of Nationally Competitive Opportunities for the Office of Scholar Development, said: “For these students studying abroad adds a component to their job resumes employers want: a demonstration of flexibility and a willingness to learn about and engage in a diverse environment. They are making a conscious effort to prepare themselves for a globalized workplace through study abroad.”

Funded by the U.S. Department of State, more than 2,700 Gilman scholarships will be awarded this academic year for undergraduate Pell Grant recipients to study or intern abroad. The program is intended to increase diversity in study abroad by funding students of underrepresented groups including ethnic minorities; students studying science, technology, engineering and mathematics; and students with disabilities. The strongest applications are written by students who will earn credit applicable to their academic and career goals while abroad.