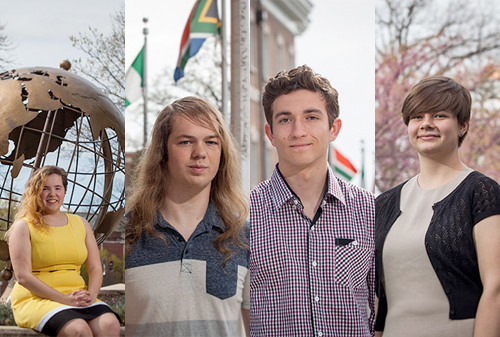 Four students at the Carol Martin Gatton Academy of Mathematics and Science in Kentucky at WKU have received nationally competitive scholarships for immersive, critical-language study this summer in China, Moldova and Morocco.

The recipients of the National Security Language Initiative for Youth (NSLI-Y) scholarships are Megan Brown of Campbellsville, Corey Goodwin of Cadiz, Logan Nofsinger of Louisville and Emma Saarinen of Shelbyville.

The NSLI-Y scholarships are sponsored by the U.S. Department of State, offering complete funding for the six-to-eight week programs. Scholarships include a four-day orientation in Washington, D.C., travel to-and-from the host countries, housing with host families, meals, and all activities and fees. NSLI-Y scholarships are merit-based and for high-achieving secondary school students to learn critical languages through immersion.

All of the students have studied critical languages with the WKU Department of Modern Languages over the past two years.

Students crafted their applications throughout the fall semester with collective help from the Office of Scholar Development and The Gatton Academy.

“Students at The Gatton Academy seek out experiences that deepen their understandings of the topics that interest them most. They also seek to connect knowledge across disciplines, adding to the complexity of their thinking. These four students exemplify this through their pursuit of experiential learning in critical-languages that enhances their interests and expertise in STEM fields,” said Dr. Lynette Breedlove, Director of The Gatton Academy. “They will represent Kentucky well as they build relationships across nations.”

Brown will be studying Arabic in Morocco on the NSLI-Y Scholarship.

She is the daughter of Steven and Robin Brown of Campbellsville. Brown is enrolled in her fourth Arabic class at WKU. As a member of The Gatton Academy’s STEM + Arabic curricular track, Brown has intentionally paired Arabic study alongside the rigorous STEM courses offered to all Gatton Academy students.

Brown said, “I hope to work for the Central Intelligence Agency or the National Security Agency as a computer engineer, so I hope to become fluent in Arabic.”

Goodwin will continue his study of the Russian language this summer in Moldova with his NSLI-Y Scholarship.

Goodwin, a senior from Trigg County High School, is the son of Danny and Melody Goodwin of Cadiz. He is in his second Russian course with WKU Modern Languages.

Goodwin said he applied to NSLI-Y for both personal and professional reasons.  “I applied to NSLI-Y to challenge myself and improve my Russian language skills,” he said. “This also comes in handy with my goal to work at NASA, an agency that cooperates regularly with the Russian Space Agency.”

Nofsinger will return to China for intensive language study with his NSLI-Y Scholarship this summer. He previously traveled to China in summer 2015 with The Gatton Academy-WKU Confucius Institute research-intensive program.

Nofsinger, a senior from duPont Manual High School, is the son of Scott and Tammy Nofsinger of Louisville. As a Gatton Academy STEM + Chinese student, Nofsinger has taken an increasingly-rigorous Chinese course each of his four semesters in addition to his STEM-based curriculum.

“I applied to the NSLI-Y program to hone my Chinese language skills farther,” Nofsinger said. “This summer, I want to establish connections for future study and business in China.”

He previously studied abroad with WKU and The Gatton Academy in summer 2015 in England at Harlaxton College and in Costa Rica during winter term 2016.

Saarinen, a senior from Shelby County High School, is the daughter of Timothy and Carolyn Saarinen of Shelbyville. Saarinen is enrolled in her fourth Russian class with WKU.

“I plan to pursue a career in mathematics,” Saarinen said. “With Russia being a world power in mathematics, I would love to integrate my knowledge of Russian with my passion for math and foster international cooperation in my field.”

At WKU, Saarinen is already involved with mathematics research with Dr. Tom Richmond of WKU Mathematics. She recently presented her project, Primitive Pythagorean Triangles in Two and Three-Dimensional Space, at the WKU Student Research Conference.

Saarinen studied abroad with WKU and The Gatton Academy at Harlaxton College in England in summer 2015.

About the Office of Scholar Development: The Office of Scholar Development is committed to helping WKU students in all majors and degree programs develop the vision, experience and skills to be independent, engaged scholars. OSD welcomes the opportunity to work with students interested in national or international scholarships. Contact: Dr. Audra Jennings, (270) 745-5043.