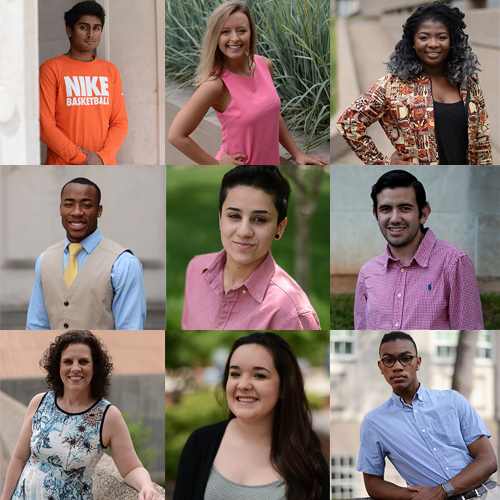 Alam, a second-year Biochemistry major, is the son of Mohammad Alam and Sammina Pervin. He will research DNA-binding proteins at Pusan National University in South Korea. After graduating in 2017, Alam plans to attend medical school.

Boisture, a fourth-year Health Care Administration major, is the daughter of Tim and Lisa Boisture. She will study aging and caregiver issues related to new trends of HIV infections in Tanzania this summer through the Kentucky Institute for International Studies. Upon graduation in December, Boisture’s goal is to become an administrator in a long-term care facility.

Francis, a third-year Health Care Administration major, is the daughter of Shina and Funmilayo Francis. She will spend six weeks working with disabled children in a service learning program at the Center for Disabled Kids in Mumbai, India. She will also help with fundraising. Francis will pursue a nursing degree after graduating in 2017.

Green, a second-year International Business and Spanish major, is the son of Tra’ Monica and Durwan Green. He will be taking advanced classes in Spanish during a two-month homestay in Granada, Spain. After graduation in 2018, he plans to pursue a master’s degree in business.

Hamoudi, a second-year International Affairs major, is the daughter of Wesal Muhi. She will study Arabic in Jordan and wants to work with immigration issues when she graduates in 2018.

Hernandez, a third-year International Business major, is the son of Salvador and Susana Hernandez and a student in the Honors College at WKU and Chinese Flagship Program. He will study at the National Taiwan University through the International Chinese Language Program. After graduating in 2017, Hernandez plans to spend a year in China.

Lincoln is a fourth-year student majoring in Paralegal Studies. She will spend five weeks in Austria studying the housing crisis due to the influx of refugees and an initiative by the public to open spare rooms to refugees. After graduating in 2017, Lincoln plans to work as a paralegal and pursue a graduate degree in International Student Affairs.

Mast, a third-year Nursing major, is the daughter of Jennifer Sluss and Dave Mast. She will be participating in a four-week ISA Service Learning trip to San Jose, Costa Rica, where she will work in a medical clinic checking vital signs, developing outreach programs and running X-rays and blood tests. After graduation in 2017, Mast plans to earn a Doctor of Nursing Practice and become a nurse practitioner.

Taylor is a first-year Psychology, Arabic and Criminology major. His studies will include intensive Arabic language immersion and U.S. foreign policy and relations in Amman, Jordan, through International Studies Abroad. He plans to seek FBI and Department of State internships before graduating in 2019 and attending law school.

Cheryl Kirby-Stokes, Coordinator of Nationally Competitive Opportunities for the Office of Scholar Development, said: “Study abroad prepares students for a workforce that rewards diverse life experiences and flexibility. Receiving the Gilman helps paves the way for students who wouldn’t otherwise have the opportunity to expand their horizons through international study.”

Funded by the U.S. Department of State, more than 2,700 Gilman scholarships will be awarded this academic year for undergraduate Pell Grant recipients to study or intern abroad. The program is intended to increase diversity in study abroad by funding students of underrepresented groups including ethnic minorities; students studying science, technology, engineering and mathematics; and students with disabilities. The strongest applications are written by students who will earn credit applicable to their academic and career goals while abroad.